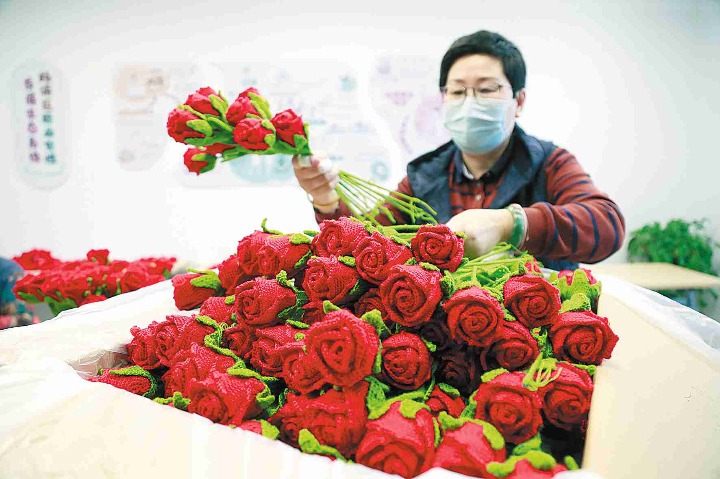 Groups of volunteers crochet bouquets of yarn for Games medalists

Medalists from the Beijing 2022 Olympic and Paralympic Winter Games receive bouquets of yarn, crocheted over several months by groups of dedicated volunteers, which include pensioners, the disabled and the elderly.

Gao Tian, ​​deputy director of the culture and ceremonial department of the Beijing 2022 Games Organizing Committee, said medalists who have already received the wool bouquets have been impressed with the design. “I have seen many medal winners take pictures with the bouquets close to their face or above their head. I think they must be happy to receive this special memento,” she said during the press conference.

“It takes 20 minutes to crochet a rose petal. A rose consists of 10 petals, three leaves and a stem. A crocheter should spend at least five hours on a rose,” said Li Meili, 70, an heir to the traditional Shanghai. crochet wool technique, who designed the bouquet.

“I am not a sports fan. But I will be following this year’s Winter Olympics as well as the Paralympics because I felt so proud to have this precious opportunity myself to compete in both events,” said Mu Guoying, 81. The-Paper.cn news portal in a recent interview.

“The last procedure for making a flower is to check whether it has sharp parts,” said the center’s Guo Yuanyuan, adding that they don’t want the recipients to feel any discomfort.

Qu Chunyu, a member of the team, said that she had seen a documentary about woolen bouquets and knew how they were made and what they meant. “The bouquet implies warmth and harmony. It can be preserved forever and become the ‘eternal Olympic flower’. We will keep them carefully,” Qu said in an interview with Xinmin Evening News.

Li, the heiress to the yarn crochet technique, said she was strict about production standards and the quality of the bouquets. “I chose fine yarn. The crochet will be slower, but the bouquets will look more exquisite,” she said.

Xinhua contributed to this story.