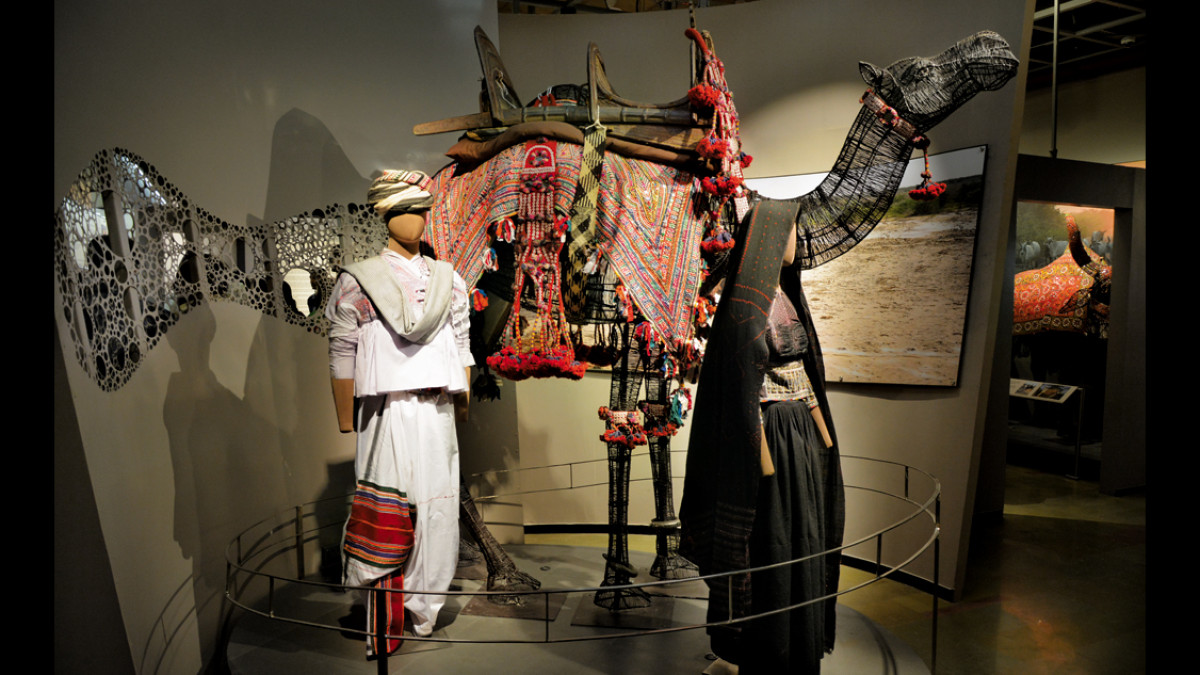 The bus left Bhuj and passed a sign advertising the Tropic of Cancer. The sun is beating down but the temperature outside is low and pleasant, it’s the end of winter after all. After a 15 minute drive, we pass a sign that says “Shrujan LLDC” (short for Living and Learning Design Centre).

This rust-colored complex houses what is perhaps India’s largest handicraft museum, showcasing the embroidery work of 12 Kutch communities. The museum has a gallery, a library and three craft workshops. The gallery exhibits change from time to time, showcasing a variety of crafts, from textiles to pottery, metal, wood and stone.

College and school research and design students, or anyone with a passion for embroidery, can register for a workshop here. A trade school is also planned soon. It will have fully equipped workshops for all trades in Kutch.

The area may be known for the White Rann, the droughts and the tragic earthquake of 2001, but – with a range of diverse but syncretic communities – it is also one of the greatest centers of crafts and country textiles.

Enter the dimly lit museum (so that the textiles on display won’t be damaged by the light) and you’ll see a breathtaking and humbling array of exquisite craftsmanship unlike anything you’ve seen before. The museum features a series of exhibits as well as embroidered panels that are close-ups of the style, designs, patterns, and more. of each community in the region.

Their craft is more than just decoration for household items; it is an important means of personal, social and spiritual expression. The different styles of embroidery are specific to each community. There is the dense and bold work of the Ahir community, enlivened with floral motifs, mirrors, peacocks and parrots; the Jat-Garaasiya and Jat-Fakiraani of the Jats; the Sodha-Pakko of the Sodhas; the Soof and Khaarek of Meghwad-Maarus; and the Rabaari of the Rabaaris.

“Embroidery is like an identity – people know when they see a particular type of embroidery that that person is from that tribe,” says Ami Shroff, director of Shrujan. “But that changed gradually. One, a lot of people wear synthetics now. Second, the tribes began to borrow from each other, so the distinct styles blended together.

Shrujan is a non-profit organization that works with craftswomen in Kutch to revitalize the ancient craft of hand embroidery. It was established in 1969 by Ami’s mother, Chanda Shroff, a well-known craftsman visionary, to support the work of Kutch craftswomen.

“It was my mother’s idea to give people who knew embroidery something better to do than work for minimum wage on the roads or on a construction site. They found this work familiar and could do it with much more dignity and grace.

She speaks of her mother’s driving passion for finding and preserving all possible varieties of embroidery in the region and encouraging people to revive the art. Chandaben, as she was affectionately known, died last year after the launch of the Shrujan Museum, created in collaboration with the LLDC.

It will take you some time to walk through the museum, read the blurbs, watch the videos and photos hanging on the wall, and examine each embroidery panel. The whole thing is like a narrative of communities – embroidery being the medium.

And there are so many stories. Ami tells us about the Rabari community banning women from embroidering, which happened around 1997. and some vessels). And they couldn’t enter their in-laws’ house until they finished the trousseau. But they had to embroider not only clothes, but torans for the doors, a covering carpet, something for the children they would have, etc. It was taking way too long. In some cases, women married but did not move in with their husbands for many years. So the community elders decided enough was enough and called for the elaborate embroidery to be banned.

The ban apparently still exists, although some enterprising women have found ways around it. But this is another story. Today, Shrujan Trust works with nearly 4,000 women in 100 villages in Kutch. Their work has been featured at events such as Lakme Fashion Week and adorns the wardrobes of people around the world.

The LLDC complex is a must-visit – as a craft destination, as an example of female empowerment, and as a study in syncretism. The resort is a quiet place, with mango and chikoo orchards. Most of the time, you will see women at work, talking to each other while sewing.

Once you are done with the museum, you can take a break at the open canteen for local dishes such as millet rotis or phulkas with the best ghee ever, pooh or dhoklaGujarati dal and delicious chaos.

Shrujan LLDC (shrujanlldc.org) is open daily except Mondays and holidays; hours: 10 a.m. to 6 p.m.; photography (and videography) is prohibited in all rooms of the museum.

It is located in the village of Ajrakhpur, 15 km from Bhuj on the Bhuj-Bhachau highway. Public transport buses as well as private buses and shared auto rickshaws are available from Bhuj to Ajrakhpur. Bhuj is connected by rail to Ahmedabad, Mumbai and Delhi, and by direct flights to Mumbai and Delhi.