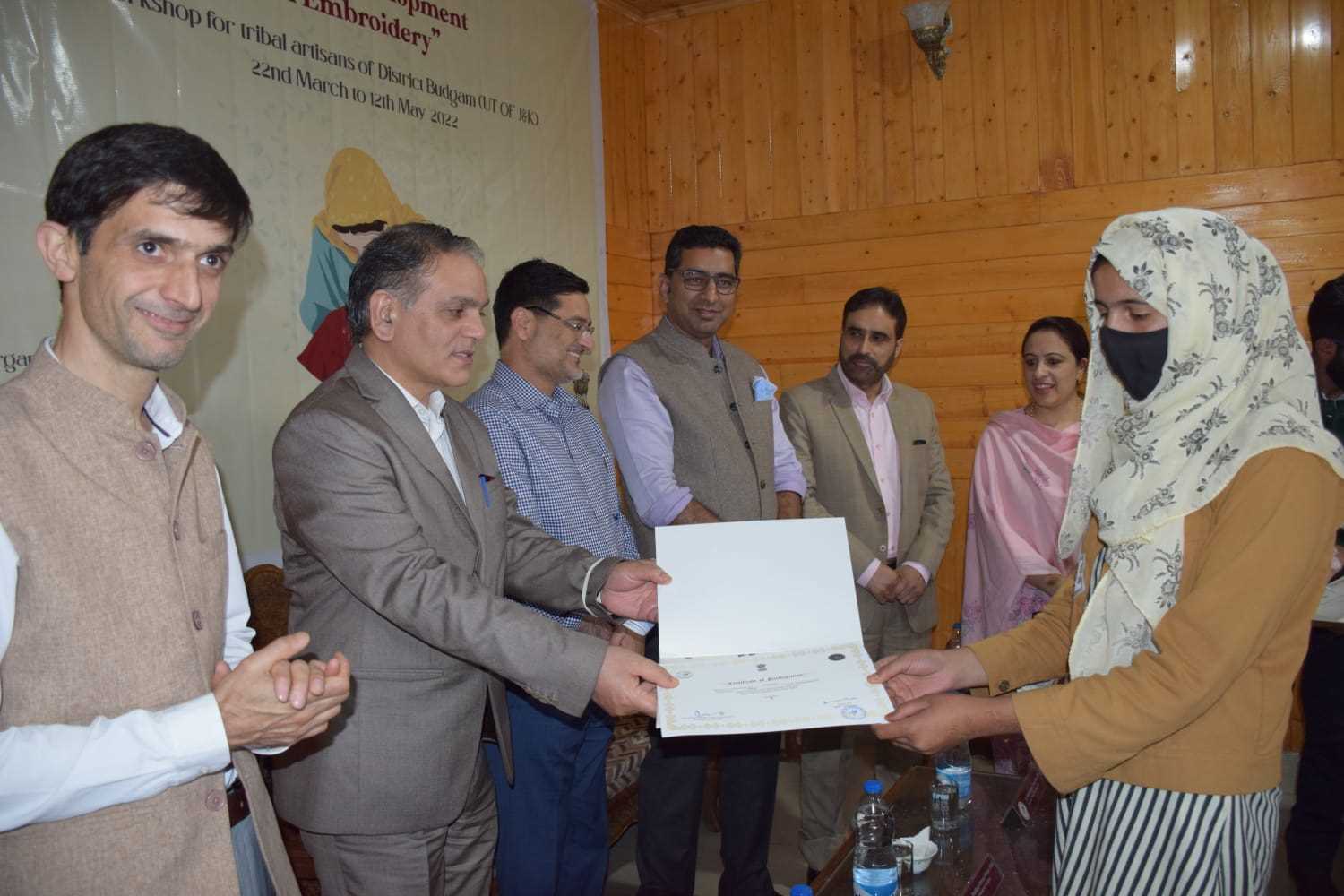 The 52-day workshop on “Embroidery Product Development” for the Budgam Tribal Artisans concluded today at a reception held at Doodpathri in Budgam. The training program was organized as part of the Cluster Tribal Model Village program.

The workshop was organized by the National Institute of Fashion Technology (NIFT) and kicked off on March 22, where no less than 27 tribal artisans received skill development trainings.

Commending the efforts of Budgam District Administration and NIFT in organizing the workshop, Tribal Affairs Secretary Dr. Shahid Iqbal Chaudhary who was the chief guest on the occasion said that the Budgam’s innovative model will be replicated in other districts as well to ensure better skills development trainings. to tribal craftsmen.

The secretary said that the government has launched various programs and organized workshops for the promotion of local artisans.

He said special exhibitions and two mega Haats would also be held for artisans to showcase their wares and efforts would be made to ensure better market facilities for all traditional crafts with new innovative designs introduced by our artisans.

He further insisted on holding more courses and ensured full support to relevant departments for the promotion of tribal artisans and their crafts nationally and internationally.

On the occasion, the Secretary also commended the craftsmen and distributed registration certificates among the craftsmen. The artisans also showcased their handicrafts and the products they prepared during the workshop period.

The Handicrafts and Looms departments had also set up their stands to present their products on this occasion.

Calling this a great achievement, Budgam Deputy Commissioner Shahbaz Ahmed Mirza who also spoke on the occasion said that these craftsmen can make the best handicrafts in the world.

He insisted on the stranglehold of these artisans and said that better market facilities are provided to them for the promotion of local arts and crafts.

He said the district administration will organize another workshop on digital design for local artisans.

He further urged artisans to make the most of the trainings and ensure that they produce better handicrafts.

He said such programs will help young tribals to compete and excel with new innovative designs.

Speaking on the occasion, Craftsmanship Director Tariq Ahamd Zargar said introducing innovation was the only way to compete and promote our art and craftsmanship.

He pointed out that e-commerce facilities are also important for his promotion.

NIFT Director, Javed Ahmad Wani also spoke about the successful holding of the workshop and deliberated on its importance in empowering artisans and transforming them into job providers.