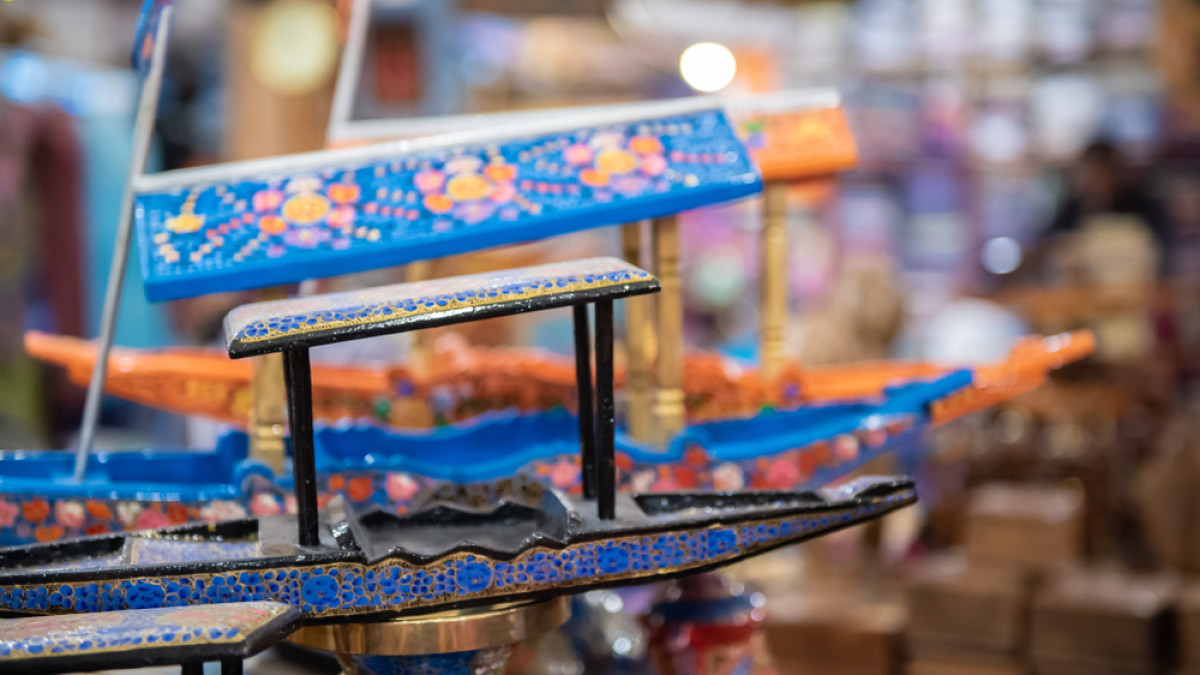 7 captivating crafts you must get from Kashmir

In the age of machine-driven industries, Kashmiri handicrafts attract travelers, local and international, for their nature-inspired works. Let’s take a look at seven traditional crafts, some dying out and some resurrected, that are still competing in the globalized market of the 21st century.

The name was given by French traders in the 15th century to the art of artisanal paper pulp with delicate designs. This internationally renowned craft was brought to Kashmir by Sultan Zaid-ul-Adadin in the 15th century from Central Asia. Shah Hamdan Mosque is the first mosque/square where its walls and ceilings were decorated using papier-mache art. There are various types of papier-mache products available in Kashmir, from jewelry boxes to teapots, willow baskets and exquisite elephants with gold leaf and willow work.

When a kani woven shawl is embroidered using the sozni embroidery technique, the end product is called kani sozni. Intricate needlework of natural designs such as lotus flowers, almond blossoms and chinar leaves are sewn close together to give the shawl a raised look. Shabir Ali Beigh’s family in Srinagar is famous for producing fine embroidery where both contemporary and traditional designs are made. Kani sozni works with monochrome palettes, and delicate designs are more expensive.

Kashmir silk and wool rugs are considered some of the finest in the world, they are exported to countries in North America and Europe. The rugs are handmade, hand knotted and intricately designed. In this photo, a traditional Kashmiri artisan weaves a rug. Nowadays, younger generation artists have added new designs like calligraphy to traditional rugs to add more meaning and style.

Kashmiri artwork showcases exquisite engraving craftsmanship, depicting calligraphy and floral designs on copper vessels such as samovars, serving spoons and kettles. Calligraphy, usually a love poem or a religious poem or a traditional verse from the Quran, is written in the Kashmiri language using Arabic or Persian script. This tradition of engraving copper vessels is still found in antique replicas and traditional vessels in the narrow lanes of the old town of Srinagar.

Known locally as shaakhsaazi, he uses the twigs of a willow plant as raw material to create everyday utilitarian products such as baskets, trays, vases, chairs and kangri (the pot of traditional charcoal tied inside clothes). This craft is practiced in southern Kashmir villages such as Kulgam and Ganderbal.

This traditional craft can be found in the karkhanas or woodcarving workshops in downtown Srinagar. Although locally sourced, good quality walnuts increase the value of products. The wood used can come from the root or the trunk of the tree. Increasingly, the branches of the tree are used due to a shortage of raw material. The wood derived from the root is almost black with a more pronounced grain, ideal for carving. However, the rigorous training required to learn this skill makes it a less popular job choice for younger generations.

Namdas are a kind of woolen mattress passed down as a family heirloom from generation to generation by the artisan families of Srinagar. Instead of weaving the wool, a namda is made by felting the unspun wool of the sheep. The process of flattening the many layers of felted wool is rigorous. Next comes the Kashmiri aari embroidery on the felted wool piece. The end products are then sold in local and international markets in the form of carpets and flooring. The craft is said to have originated when Akbar had asked for something to cover his horse which had been affected by the cold in Kashmir.