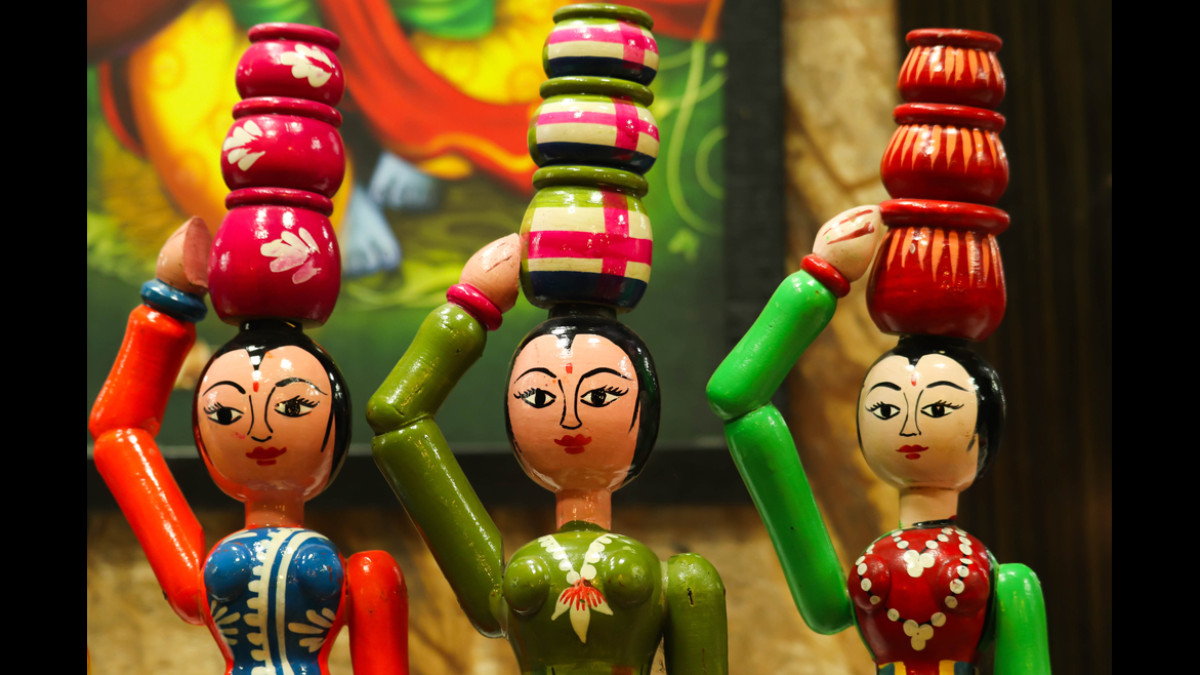 9 Indian handicrafts and looms protected by a GI

India is home to a myriad of looms and crafts that have been in vogue for centuries. These traditional products are not only beautiful to look at, they also reflect the craftsmanship of India. Due to competition from mass-produced machine-made products as well as foreign products, traditional weavers and artisans are already fighting a losing battle. However, with the support of tourism and other sectors, they can easily regain their former glory. Some of the products are so light that they can be purchased as gifts or souvenirs for a personal collection, without weighing down your luggage.

So, on this World Intellectual Property Day, April 26, we are showcasing unique Indian handicraft products that are protected by a Geographical Indication Label (GI label) to protect their innovation and creativity associated with these products.

A visit to any workshop or shop selling Dhokra (also spelled as Dokra) wares will leave you spoiled for choice. One of the oldest forms of metal casting in the world, the lost wax process, has been known in practice among the tribal peoples of India for centuries. With a predominant tribal population, the forested Bastar is one of the best places to seek out these delicate souvenirs made from an alloy of brass, nickel and zinc. Traditionally used for ritual purposes and in homes, artisans made human and animal figurines, small bowls, etc. But now they have expanded the models. So now you can buy a set of tribal musicians playing their instruments, the elephant-headed god Ganesh in various poses, tribal jewelry, designer boxes and stands, table accessories, and more. Bastar Dhokra got his GI tag in 2008.

Acres of coconut plantations along the shores are comfort to sore eyes as you row along the backwaters of Kerala. But did you know that you can buy exquisite handicrafts made from the shells of these coconuts? Due to India’s long coastline, you will also find coconut shell handicrafts in other coastal states, but only in Kerala will you find them intricately designed (similar to the embroidery) with brass. But it’s not an easy process – shaping and sculpting the hard shell is a difficult task. You can get a wide range of products, from kettles and curry pots to water jugs, plates and cutlery, display pieces and more. Utility products can also be used by hotels and restaurants. This coconut shell craft got its GI tag in 2008.

Picturesque Chamba in the shadow of the Himalayas is a popular tourist attraction. But have you ever picked up a Chamba Rumal? This square or rectangular piece of embroidered fabric (also known as Roomal), often likened to a handkerchief, is one of the best keepsakes to have. Although there are several stories associated with the origin of the craft, it is generally accepted that it has been around for over three centuries. Many believe it to be a continuation of the Chamba tradition of miniature paintings. Traditionally, these embroidered rumal were part of a bride’s trousseau or were given as gifts. Not only the colorful presentation but the detail of the work is also to be noticed. Without his royal patronage, the popularity of rumal began to decline. However, several efforts have been made to ensure its continuity. You can use them as blankets or frame them as wall decor. Chamba Rumal got his GI tag in 2008.

Channapatna on the Bangalore-Mysore highway does not need a sign. Colorful wooden toys are your best point of reference. Stop at the shops on the highway to pick up some souvenirs if you’re in a hurry. But for a better choice and to enjoy the visual treat and see how they are made, a visit to the village is a must. Usually made from soft ivory wood, the toys are painted with vegetable dyes and then polished with a special grass. In addition to human and animal figurines, artists make cars, locomotives, decorative and utilitarian objects, even educational toys. Although now toys are made by machine, you may find an artist or two who still make them by hand. Although it is generally believed that the Channapatna toy industry was patronized by the former ruler of Mysore Tipu Sultan, there are various stories of how he patronized it. Channapatna toys got their GI label in 2006.

In between enjoying the forts, palaces, and exhibits of miniature paintings in Kota and Bundi, be sure to seek out this little-known gauze fabric. The material is so light that you can buy several sarees, dupattas and stoles without significantly increasing the weight of your luggage. Avoid products made by a loom and opt for the handloom variety. Although the genesis of this fabric is still a mystery, many trace its origin to Mysore (Karnataka), pointing to the earlier name of the fabric, Kota Masuriya. While some say that weavers from Mysore settled here during the Mughal period, others suggest that the silk threads were brought from Mysore. This fine and delicate fabric with its square pattern is woven from cotton and silk and is a laborious process. Ornamental patterns or embroidery can also be added to the pattern. It takes about two to three months to produce a saree on the loom, depending on the weavers. Kota Doria is slowly finding favor with fashion designers. If you have free time, go to Kaithoon village, about 20 km from Kota, which is today the most popular weaving center of the cloth. Kota Doria got her GI tag in 2005.

Although part of the heritage of Andhra’s shadow puppet theater (Tollu Bommalu or Tollu Bommalatta), these leather puppets make excellent souvenirs, especially for interior decorations. Apparently the art developed in 200 BC under the Satavahana rulers. The dramas are usually based on tales from the Ramayana and other folk tales. Traditionally, puppets are made of thin skin, but nowadays parchment is also used. With the exception of characters such as Ten-Headed Ravana, most puppets are made from a single piece of skin. These colorful and finely crafted puppets will definitely add ethnic chic to your living room or office. The leather puppets got their GI tag in 2008.

One of the finest silks ever produced, Assam Muga is not only unique for its golden sheen (which improves with each wash), softness and durability, but also as one of India’s oldest weaving looms. The silkworm from which the threads are drawn is found only in Assam. According to many historical accounts, the golden period of silk was during the Ahom period when it was a flourishing industry and became a part of Assamese culture. Silk is widely used to weave traditional state clothing for women – mekhala chador – as well as sarees and other clothing fabrics and is also used in various products. Even today’s fashion designers have discovered the versatility of Muga silk. The village of Sualkuchi is the best place to see the weavers at work. Muga Silk from Assam got his GI tag in 2007.

One of the lesser known handicrafts in the Kashmir Valley is Sozani handicraft, a delicate form of hand embroidery that has been practiced for centuries. Traditionally, cotton, silk and woolen threads were used for embroidery, but now synthetic threads are not unheard of. The threads are usually dyed in-house in different colors and then used to sew the patterns (mainly floral and geometric) already traced onto the fabric using engraved wooden blocks. The price of the embroidered item depends on the complexity and style of the design and the time required to execute it. One of the striking characteristics of embroidery is that each one is a unique product, since each person who performs the sewing has their own style. Sozani craftsmanship obtained its GI label in 2008.

Considered one of the oldest schools of drawing, this popular art of the eponymous tribe of Maharashtra, reflects an excellent use of geometric shapes. In ancient times, tribal people drew scenes of nature and everyday life (including social functions such as weddings) on the walls of their homes, for rituals or for decoration. Usually executed in white color (based on rice paste and gum), they stand vividly against the walls of red ocher mud. Even though it is in decline, you can still see the art being practiced in places like Palghar, Dahanu, etc. (easily accessible from Mumbai). You can collect some of the paintings currently being executed on fabric and frame them for your wall. Some companies have also decided to transpose these patterns to clothing fabrics and furniture. Discover the shops of Mumbai. Warli paint obtained its GI label in 2014.