Mahila Manovikas members from all over India and other countries have set a Guinness World Record by posting 4,686 crochet caps

Mahila Manovikas members from all over India and other countries have set a Guinness World Record by posting 4,686 crochet caps

Crochet hats in the shape of owls and bears and multicolored beanies lie on the floor of a hall in Akayyapalem in Visakhapatnam as a group of women wait anxiously next to their creations. A few hours counting later, there are broad smiles and jubilation. These women are members of Mahila Manovikas which set a Guinness World Record for the largest display of crocheted caps and hats earlier this week. About 200 crocheters from all cities in India and other countries made 4,686 caps to set this record.

“It is a wonderful feeling. We believe we have achieved something and it has been possible after months of effort by women from all regions,” says Visakhapatnam-based Madhavi Suribhatla, founder of Mahila Manovikas. There were participants as young as eight, to those as young as 70, from all walks of life.An expert and prolific knitter and crocheter, Madhavi has been involved in crochet since 2014. She was previously part of three Guinness World Records for the most large display of crochet scarves, crochet sculptures and Christmas decorations.

Madhavi started her first online class in 2020 at the start of the pandemic, with the basics of crochet for a group of 30 people. Soon requests started coming in for advanced techniques and she decided to form a group with crocheters from around the world with Mahila Manovikas. Today, she is teaching her 22nd batch online and has trained crochet enthusiasts across India and places like the US, Dubai, Sweden, Singapore and Australia. Members from Maharashtra and Ahmedabad showing their contribution to the largest exhibition of crocheted caps and hats by members of Mahila Manovikas who set a new Guinness World Record in Visakhapatnam. Around 4,000 caps were made by 200 members around the world | Photo credit: KR Deepak

“It’s nice to see the community getting involved, especially after being physically disconnected for the past two years,” she says, adding, “The idea behind setting a record for crochet caps was to create something useful that can be given away to the needy, rather than making something decorative just for the record. The concept of “giving back” has long been a philosophy for these crocheters. Most of them will donate their works to orphanages and retirement homes.

The event saw participants travel to Visakhapatnam from cities like Hyderabad, Ahmedabad, New Delhi, Madurai, Coimbatore, Mumbai and Chennai, encouraging each other and sharing a passion. For Nidhi Sah from Ahmedabad, the experience gave her a platform to be part of a global community. “This project involved teamwork and coordination, which allowed us to bond. Crocheting is a relaxing experience for me. The pandemic has given me the opportunity to revisit this passion of mine,” says Nidhi, who traveled to Visakhapatnam to be part of the record breaking moment. 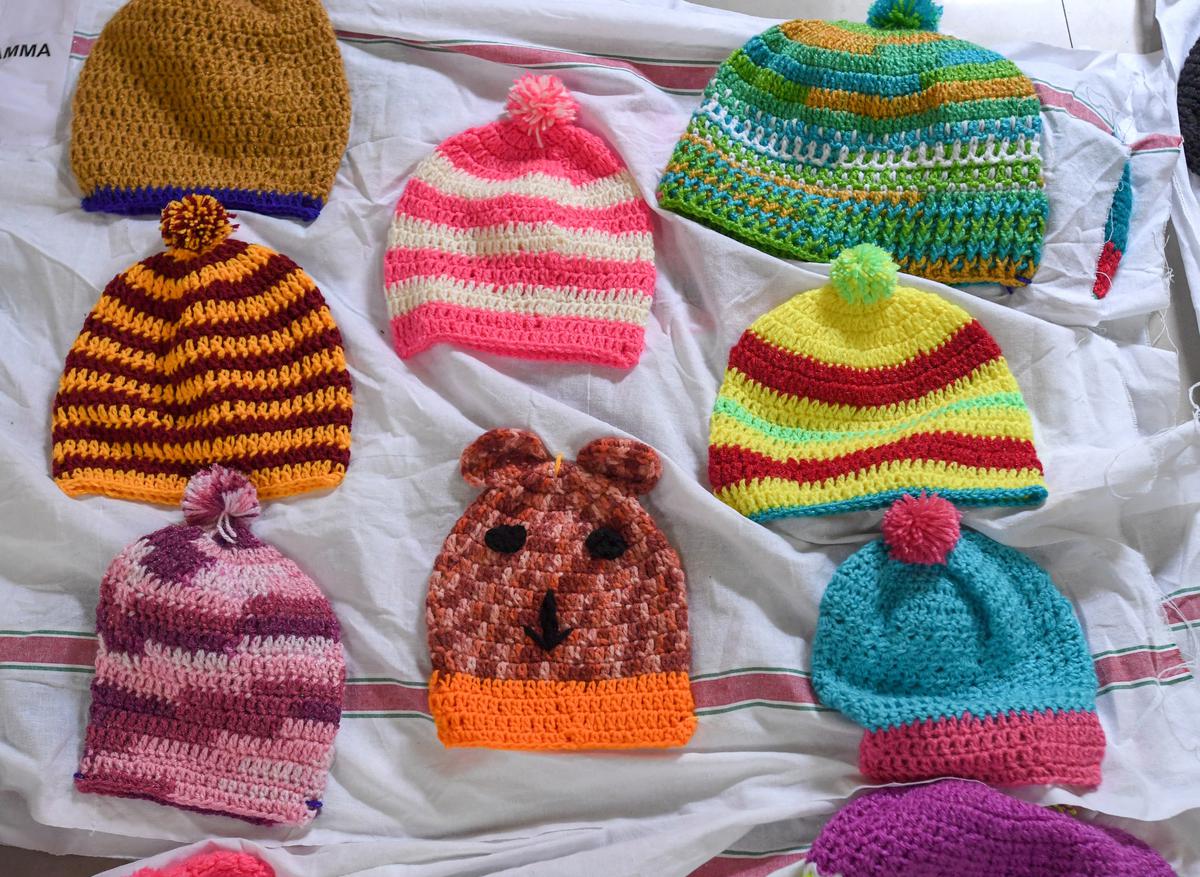 The largest exhibition of crocheted caps and hats by members of Mahila Manovikas which set a new Guinness World Record in Visakhapatnam. | Photo credit: KR Deepak

Nagpur-based Anu Sabharwal has created a collection of newborn beanies and adult beanies for the project. “This effort took us more than three months. There is something soothing in the snapping of the needles, the rows that grow…”, she adds. The youngest entrant was eight-year-old Vedanvitha Tamarisa Mandala, who along with her 11-year-old sister Anveditha made five selections each. The sisters, who are home-schooled in Hyderabad, were among 11 other children who took part. The two started learning to crochet three years ago and have been making bags and caps throughout the pandemic in their arts and crafts sessions. “My grandfather was the happiest when he heard about our success. His mother, my great-grandmother, was a good crocheter. But after her, no one started crocheting in the family. He so was absolutely thrilled,” says Anveditha. The largest exhibition of crocheted caps and hats by members of Mahila Manovikas which set a new Guinness World Record in Visakhapatnam. | Photo credit: KR Deepak

“The girls learned life skills through this experience. It was their first participation in an international platform and they were part of a huge coordinated effort. They also had to communicate with a mixed age group, patiently waiting for their questions to be answered. There was a schedule given to each participant, so that they understood the importance of discipline and taking time out of their routine to complete their crochet works,” says their mother Anuradha. From choosing the yarn color and design of the caps, to being vigilant about communications about the project by the team, they did it all on their own. 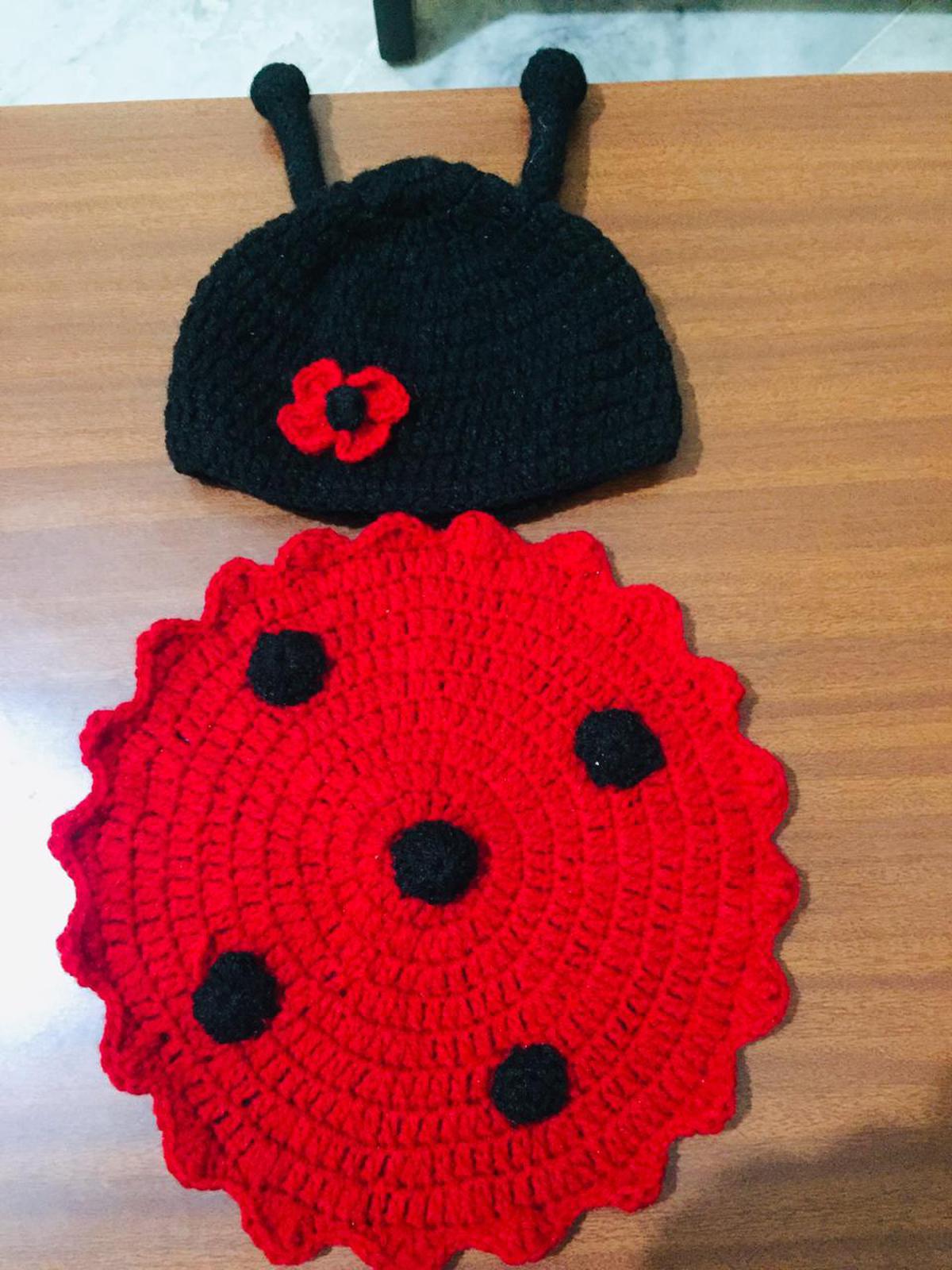 Madhavi says social connection, by being part of a group or even engaging with online communities, could be a boon for those spending time alone. “I’ve seen how it helps women bond and share stories,” she adds. Her next record topping is for the largest display of ponchos, which she plans to donate to the Araku and Paderu tribal communities.