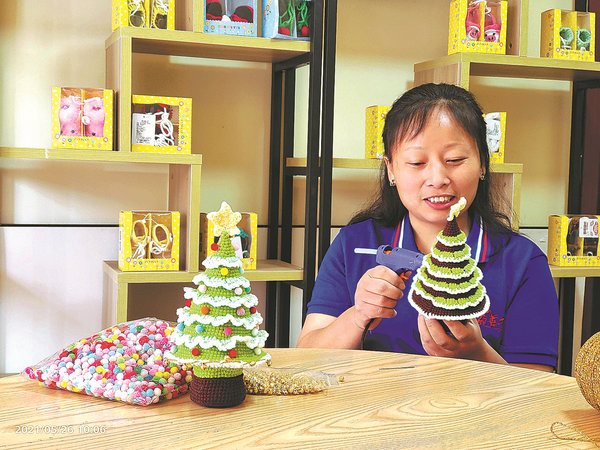 A knitting teacher gets rid of gloom

Li Ronghua used to stay indoors all day because she uses a wheelchair and she was afraid people would look at her.

The 38-year-old, from southwestern Sichuan province, said she had very high self-esteem, so she refused to be the object of curiosity or pity . This self-esteem proved useful, as it led her to overcome difficulties and start a career in knitting.

She earns about 2,000 yuan ($315) a month from the skills she learned at a knitting training center in Hongshan, Langzhong City, Sichuan. Although the center is 8 kilometers from Li’s home, she insisted on going there every day to learn new skills.

It was established by the city’s disabled people’s federation in 2018 to train people with disabilities, especially those with low incomes. The center also helps sell their products, both online and offline.

After mastering many skills at the center, Li started working for a handicraft company run by local disabled people. She distributes knitting materials to more than 100 people with disabilities, who work from home, and then sells her products online.

Li now teaches knitting techniques through the company’s live streaming platform. “My fans call me ‘Teacher Li’, which gives me a special sense of accomplishment,” she said.

Her life was dark before she became a teacher. She said her farmer parents were tired of their life in poverty, so they named her Ronghua – “wealth and prosperity” – to express their wish for a better lifestyle.

“However, fate played a big joke on them. I didn’t bring them any wealth – instead, I ended up sitting in a wheelchair in my thirties,” Li said.

After graduating from high school, she went to Guangzhou, capital of Guangdong Province, to do odd jobs like other girls in her hometown.

During this time, she felt something was wrong with her leg muscles, which gradually atrophied. She was diagnosed with meningocele, a condition that affects the spine, and other conditions that caused problems with her legs. “The doctor told me that a bulge in my spinal cord had compressed a nerve, which affected my legs,” she said.

In 2004, she underwent three spine surgeries but was left paralyzed because she missed the optimal time for treatment.


“I couldn’t accept that I would never be able to get up again. I was shrouded in disappointment and wouldn’t leave the house all year. I refused to apply for a disability certificate because I still have hoped that I would heal one day.” she says.

“Years later, my gloomy mood disappeared after people from the city’s disabled people’s federation comforted me. They told me that I should focus on what I had and ignore what I had. didn’t have, and that a small tree can become a big tree with just a little bit of sunshine. I took those words to heart and started raising chickens for a living,” he said. she stated.

In 2007, Li got married and had a son. Her husband worked odd jobs to support the family, and Li was also looking for a stable source of income to help out.

When the training center opened in 2018, staff members of the federation immediately urged her to enroll.

“Despite my inability to walk and my fear of being laughed at, I decided to give it a try,” Li said. “I’ve always been competitive, so I believed I could master the skills, despite some difficulties.

She got up at 6 a.m. every day, and after making breakfast and sending her son to school, she went to the centre.

“Learning made me happy because I saw my skills improve. My teacher, who is disabled, was patient and considerate in the way she explained things and showed me how to knit. I admired her ingenuity and I wanted to be like her – someone who brings something valuable to society,” she said.

After a little over a month, Li mastered many knitting techniques and was able to teach them to other people.

Last year, she rented a room in Langzhong for herself and her son, who attends middle school in the city.

“I want my son to go to school in the city, so I have to fight for my family. Having a job as a knitting teacher makes me feel safer than ever,” she said.

According to the federation, more than 300 low-income people with disabilities in the city have learned to knit at these bases and are using their skills to earn a living.

By knitting pendants, dolls and woolen baby shoes, they each saw their monthly income increase by more than 1,000 yuan, he added.