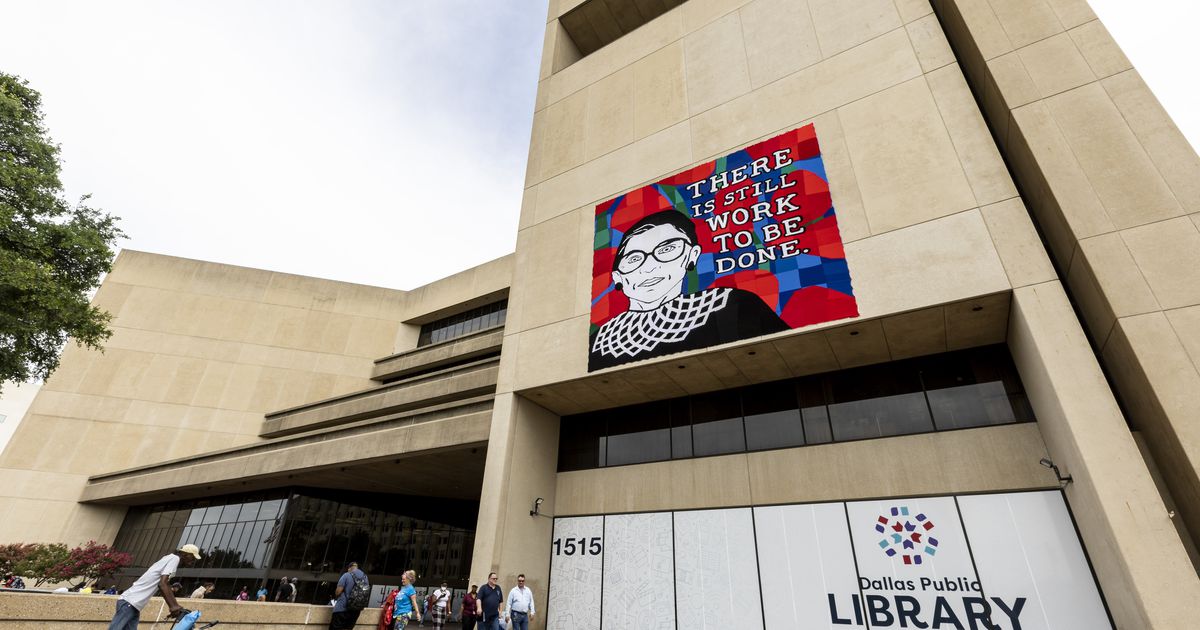 A new mural has joined the ranks of Dallas street art, adorning the front wall of the J. Erik Jonsson Central Library. But this mural was not created with paint. And it took 150 people to do it.

Love Across The USA, a public art project led by Los Angeles-based artist London Kaye, earlier this month installed a crochet mural of the late U.S. Supreme Court Justice, Ruth Bader Ginsburg, with the quote: “There is still work to be done”.

With murals often celebrating great American women — like Harriet Tubman in Auburn, NY, and singer Nina Simone in Raleigh, NC — Kaye said the goal of Love Across The USA is to bring people together in big-picture projects. ladder that spread the love and showcase the art of crochet.

“It’s really for everyone in the crochet community to do something meaningful and different with the craft that we all love so much,” she said.

Kaye first contacted the city’s Office of Arts and Culture in December 2021 about the mural. From there, she was connected to the Dallas Public Library. “Our country can be so divided, and I felt like Dallas was really at the center of a lot of the political climate when it comes to so many things that are going on right now,” Kaye said.

She received an enthusiastic response from the library, “and that was the best sign that this was the right place for the work,” she said.

As she works on projects across the country, Kaye sends the information from the mural to the more than 1,200 crocheting members of Love Across The USA. People sign up on a first-come, first-served basis — spots for the Ginsburg mural are filled within an hour — and hookers are assigned to a square based on their level of experience.

Crocheters are then given a specific pattern and guidelines on what colors to use for their 2-by-2-foot square. Kaye coordinates with crocheters on the yarn colors they already have at home and sends them patterns accordingly so they don’t have to buy more.

People from across the country and around the world, including Canada and the United Kingdom, have contributed to Ginsburg’s mural. The mural squares were posted to the library, and over two days local crocheters — as well as people from out of state — combined the squares.

“Of course, you see such great art, but seeing all the individual pieces come together and an image coming out of it really made it clear that it really is a work of art,” Giudice said.

Gina Owen is a member of the Dallas Yarn Bombers group, an organization that makes yarn installations throughout the city. She crocheted a square for the Ginsburg mural, which was her second project with Kaye. She previously worked on the Kamala Harris installation in Washington D.C.

“Normally, you’re home alone putting together a blanket…or a scarf. People wear it,” Owen said. “It’s different to see it as an art form.” Owen crocheted pattern No. 86, which is the curved part of the letter “D” in the quote.

“Putting it all together gave us goosebumps.” she says. “To be able to do this and share the women who have had such an impact on history, and exhibit them in Dallas, is really special to me.”

Kaye took over operations of Love Across The USA in late 2020. The former executive was the Polish artist known as Olek, whom Kaye met in New York in 2013. Kaye worked at an Apple store and sold a computer to Olek. This encounter inspired Kaye to get involved in yarn bombing. Seven years later, Kaye said Olek contacted her after dreaming that she would be the right person to take over the organization.

“Going through this time of COVID where we were all so divided, I was really looking for projects that would bring people together and do something bigger with our art,” she said. “It was really almost cosmic timing.”

Kaye learned to crochet when she was 13 years old. She started making scarves and selling them to local businesses, family and friends, and at 16 she bought a car with the money from her scarf.

“Early on, I always looked at crochet as a way to do something a little different than what other people see,” she said.

Now 33, she has been crocheting for 20 years and has made a name for herself in the yarn community. Kaye launched her own line of yarn and published a book called Crochet with London Kaye. She has collaborated with major brands like Starbucks, Michaels, Disney and The Kelly Clarkson Show on installations

Currently, a “Peace for Ukraine” mural is installed on the World Trade Center in New York and one in West Hollywood is in the works at the end of the month at the corner of Laurel and Melrose Avenue. There are no new murals on the Love Across The USA record, but Kaye said “there will definitely be more.”

“It really is an exciting project,” Kaye said. “I crochet all day as part of my job, but these projects kind of happen when the time is right.”