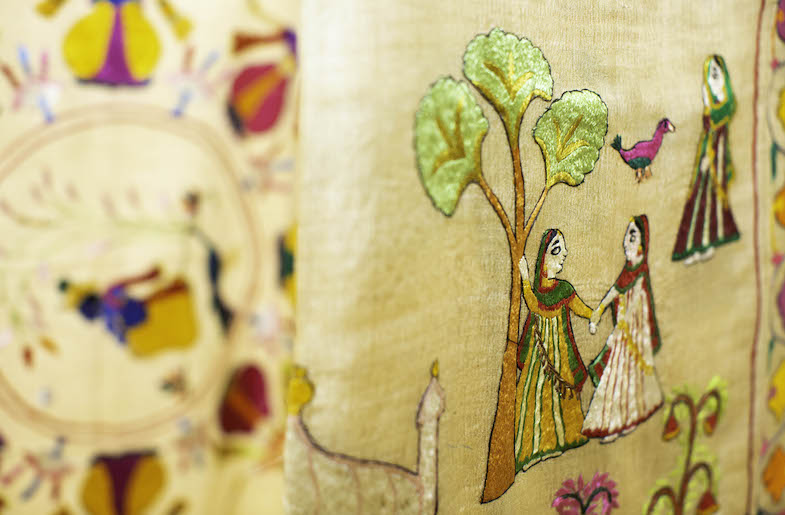 The educated traveler – A column exploring the many miles of what South Asia has to offer.

Get stories from India Currents straight to your inbox.

When we say Rumal, a small square piece of cloth or a handkerchief, an object of daily use, flashes before our eyes. Rumal is the Persian word for handkerchief… but this Chamba Rumal is not used to wipe hands and face; it is a pure form of art, culture and heritage – a perfect display of Himalayan embroidery and craft traditions. ‘The Chamba Rumal takes its name from Chamba, a hill station in Himachal Pradesh, where it has been practiced for centuries and patronized by the kings of Himachal Pradesh. This region is also known for its miniature Pahari paintings (of mountains).

Originating in the Chamba Valley, a thriving 18th and early 20th century mountainous region of northern India, the Chamba Rumal is a form of hand embroidery. Since the theme is similar to those painted on miniature paintings, it has also been called “Embroidery Paintings”.

Queens and ladies of royal families used to do Chamba Rumal embroidery in the 17th century for wedding dowries, important gifts and ceremonial coverings. It was a tradition in the royal houses that as a sign of goodwill, the families of the bride and groom offered each other gifts. Gradually local artisans, especially women, began to practice the art and it passed outside the palace walls.

In the 16th century, Baby Nankisister of the Sikh spiritual leader Guru Nanak, is said to have embroidered a Chumba Rumal and this piece has been preserved in the state Hoshiarpur shrine. Another exquisite piece of this embroidery made its way to Britain in 1883 when Raja Gopal Singh presented a Chamba Rumal embroidered with a scene from the Mahabharata to the British and it was later added to the collection of Victoria & Albert Museum in London.

The dot is the key

Impeccable stitching on the Rumals Chamba is derived from the art movement of combining miniature art with embroidery. They are usually made of square or rectangular fabric in different sizes. The basic art, characterized by intricate lines, is drawn by miniature art experts. After the art is completed, the embroidery, usually done by women, is done with precision onto the fabric. A fabric used is mostly naturally dyed silk yarn over unbleached muslin or khaddar. National Award Winner, Lalita Vakil said, “The image on both sides of the fabric is almost the same. The drawing is done in outline with fine charcoal or fine brush. The embroidery is done using a double satin stitch carried forward and backward alternately in a variety of colors. Simultaneously, both sides of the fabric are sewn so that the space on both sides is filled, which makes the design on both sides equally effective and similar in content. This technique is called dorukha (two-sided).

The stitch is worn both backwards and forwards and covers both sides of the fabric, giving it a smooth finish that is flat and looks like the colors were filling in a miniature painting. The best part is that the embroidered Rumal can be seen from both sides and no knots are visible, so it can be used from both sides. The embroidery is mainly done in double satin stitch. The bottom is barely visible but it is very difficult to identify the right side.

The designs of these large size Rumals are traditionally inspired by the stories of Ramayana and Mahabharata, figures of Krishna, his Gopis, scenes from the Bhagavad Puranas, nature, daily life of Chamba, folk stories of the region, floral patterns, etc. At first, Raasmandala (an episode of Krishna’s dance) was the most popular design, followed by Gaddi Gaddan (a man and woman from a herding tribe who resides in the hills of Himachal Pradesh). You will find themes like Kaliya Daman, Rukmini Haran, Ragas, Ashta Nayak which portray the mood swings of the relationship between a man and a woman within this art form. This art, where miniature painting meets weaving, opens up a world of stories passed down through generations and traditions that speak of nature, faith and life – thus it functions as a work of literature.

After independence, freedom fighter and craftsmanship revivalist Kamaladevi Chattopadhyay revived this art which was on the verge of dying for lack of patronage.

Souman Bajpai is a Delhi-based freelance writer, journalist, editor, translator, traveler and storyteller. She has written more than 12 books on different subjects and translated around 150 books from English to Hindi.

2021-05-28
Previous Post: How a New York designer is putting Jamaican crochet on the map
Next Post: Shopian’s ‘Embroidery Lady’ leads the way in entrepreneurship thanks to government scheme