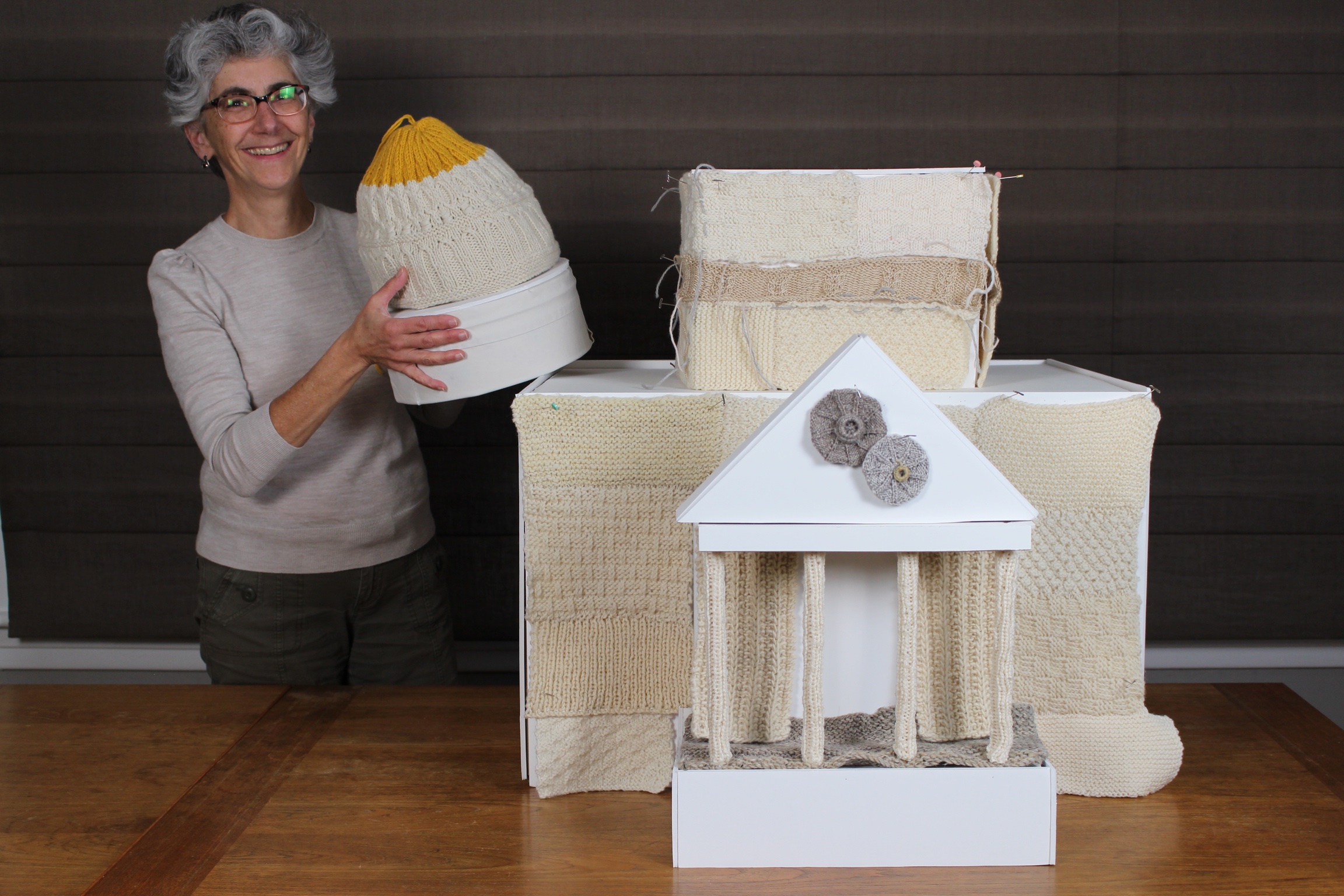 Knitting can feel like a constant work in progress. Montpellier-based artist Eve Jacobs-Carnahan thinks democracy is no different.

This led her to start Knit Democracy Together, a collaborative knitting and discussion project. Since 2020, Jacobs-Carnahan, who for 27 years served as an assistant attorney general specializing in electoral law, has facilitated knitting circles in which participants discuss democratic concepts.

Visitors to the Vermont Statehouse this fall will be able to see a product of that work: a hand-knit, three-dimensional model of the state capital, designed by Jacobs-Carnahan and built with the help of his knitting circle participants.

To construct the sculpture, Jacobs-Carnahan first constructed the central form of the building using materials like cardboard, foam board, and dowels. She then glued rectangular fabric segments, each of which was made by knitting circle participants, to the outside.

Jacobs-Carnahan sees the process as a metaphor for participatory government.

“That’s also how democracy works, isn’t it?” she says. “These different pieces are put together to create something bigger than your individual piece.”

The model will be on display in the Statehouse Card Room until October 30. An event to complete the segments that will make up the model’s colorful garden and lawn is scheduled for September 17.

Jacobs-Carnahan invites everyone to participate in knitting circles. As the participants sew, she discusses how elections work. Topics may include voting methods, election verification, preferential voting, and campaign finance, depending on the Knitting Democracy Together website.

Jacobs-Carnahan’s knitting circles typically last an hour and have taken place in person and online, according to its website. She pointed out that the events are light.

Jacobs-Carnahan explained that the connection between knitting and democracy dates back to the American Revolutionary War, when colonists boycotted British textiles and made their own.

“It was a patriotic demonstration to show that we were bringing people together and spinning the wool and turning it into cloth clothes using our own labor,” she said.

She called her project craftivism, a practice in which artists advance social issues or raise awareness of certain topics through craftsmanship. Using knitting as a way to talk about civics can be very effective, she said.

“The knit is very disarming, it’s very comfortable,” Jacobs-Carnahan said. “You can break down the barriers a bit and then you can talk about a really important and complicated topic like democracy.”

Jacobs-Carnahan began knitting at the age of seven, and in the early 1990s discovered knitting for sculpture. “It just blew my mind,” she said.

At first, she started creating knitted sculptures that carried messages about the environment. Then, in 2019, “it kind of gelled for me,” she said. “It was like, oh, that’s my problem. I have all this experience in electoral knowledge. That’s what I’m really passionate about and can really communicate in my works.”

She began the project by teaching knitting circle participants about the impact of money in politics. After the 2020 election, she began discussing how disinformation was undermining the electoral process and causing widespread confusion about basic democratic concepts. Now she is also taking on gerrymandering and the restriction of ballot access by some state legislatures.

“All of those things really offended me,” Jacobs-Carnahan said. “They were just removing the basis of much of the functioning of our democratic system.”

Although she aims to reach a diverse group of attendees, most knitting circle attendees are women who create, Jacobs-Carnahan said. She plans to expand the call in an upcoming session at Sharon Academy on September 29.

“I do outreach with the people at this school to really try to include the students,” she said. “It will widen the age of people.”

She emphasized that no prior knowledge of knitting is required at her events.

In response to our readers, VTDigger has expanded our regional reporting team. While our journalism is free to consume, it takes resources to produce. Please join our fall membership drive and support news for all corners of Vermont.