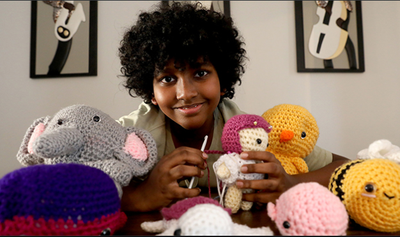 A young boy from Durban, Kalon Reddy decided to use his creativity to make money online…

When we see things like that, it really makes us smile. When you see young people bring their passions to life in such an innovative and positive way.

When it comes to practicing what you are passionate about, our generation would often advise against it. We come from a generation where parents would advise us to worry about getting a well-paying, money-making job.

Read more: LISTEN: Durbanite Romario Valentine gives back to the birds on his 10th birthday

But there are plenty of parents and kids who have a special talent or are passionate about something, and get so attached to it that they decide to go for it. Kalon Reddy, 13, from Durban, is one such child. He has had a passion for needlework since he was 8 years old and his follow-up teachers taught him how to knit.

It was the start of something for Kalon as his mother, Zandile Qono, supported his passion and took him to the craft shop. From there, the confinement presented itself, and for many it was a moment when one felt confined, but not for this little man, who took the opportunity to concretize his passion.

Kalon had watched videos on TikTok about crocheting, but it wasn’t until just a month ago that he started watching crochet tutorials on YouTube, which started him on his crochet journey. .

He started practicing amigurumi, which is a Japanese art form, to create stuffed animals. The best part of it all is that Kalon says, “I like doing things. It’s easy and soothing.

Kalon created elephants, bees, a dinosaur, whales and, using a standard method, made a blanket, two cardigans and crop tops for her sister.” (Times Live Website) Talk about being creative with a functional and practical way…This young man is not always easy with himself, his mother said she was not surprised when she saw his creations because she always knew he had Talent.

Kalon has always been creative. It started with a crop top for my daughter and then moved on to stuffed animals. I ordered the elephant after he made me a whale. I asked him if I could post the whale to my Facebook, but he wouldn’t let me because he said he wasn’t completely satisfied with his craftsmanship on the whale. He is also very critical of himself.

Read more: LISTEN: Six-year-old Reece from PMB uses R50 to get a new car for his ‘Nani’

Zandile’s Facebook post got a wonderful response from her friends, who also inspired her to start Kalon’s Krafts, where Kalon can sell her designs online.

He is a small man with many talents, he also learned to cook thanks to YouTube. It’s so wonderful to see social media being used to improve the skills of young (and old) people. According to tech expert Arthur Goldstuck, “YouTube has been the unspoken secret of youth for at least the last decade.” (Times Live website)

A great overview of the benefits of social media use among children, and that too at a time when things are so uncertain and unpredictable in our country.