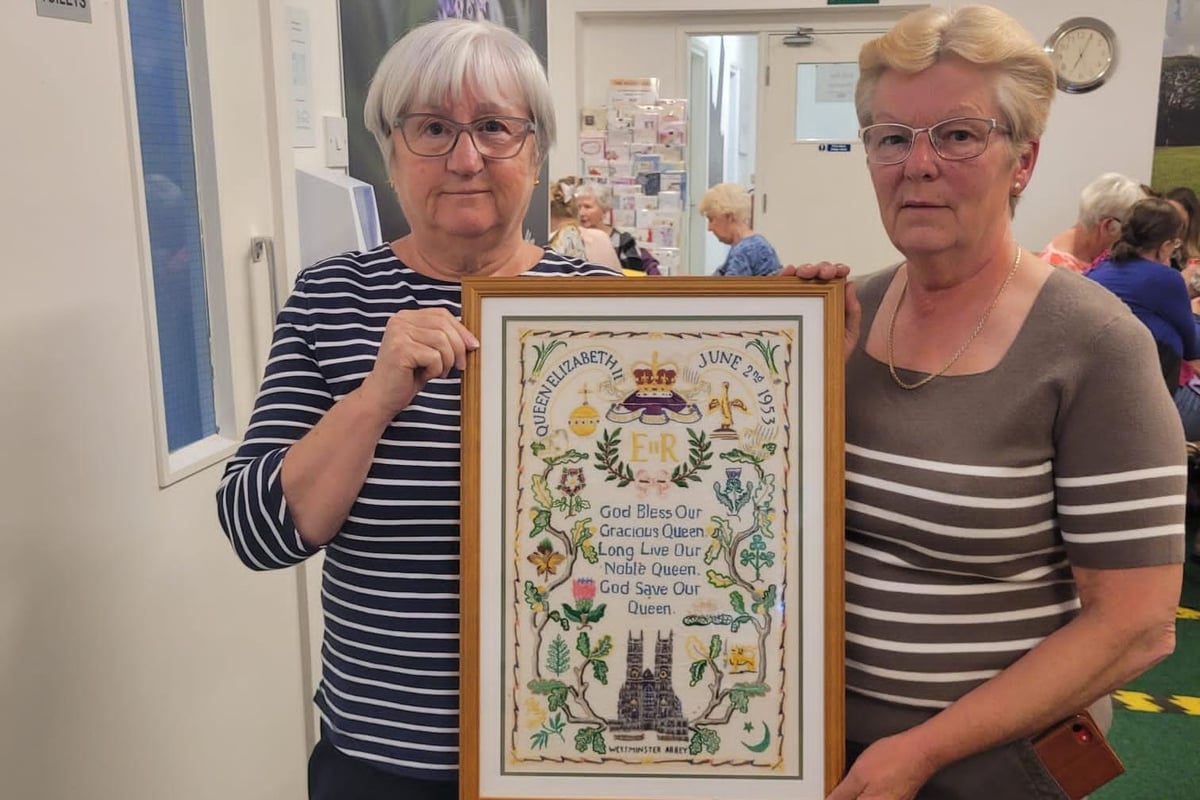 Elizabeth Brandon, known as Betty, loved the craft and started working on royal-themed embroidery in 1953.

Weather forecast in Wigan for Bank Holiday Weekend to celebrate the…

But she never finished it and it was found at her home in Aspull by her daughter Julie Baxter, after she died in December aged 85.

Register to our daily newsletter

Jean Padgett and Julie Baxter with the finished embroidery

Julie decided to donate the embroidery, along with boxes of cotton, wool and other items, to the knitting and matting group at The One House in Aspull and a similar group at a church in Blackrod.

She was delighted to receive a phone call from Kathleen Marsh, of The One House, who suggested the embroidery be completed and sent to the Queen.

Julie said: “I thought it was a great idea because otherwise it would just be sitting in a box. My mum had done the majority of the embroidery and the date on the envelope was 1953. She had for a long time, even before she got married 65 years ago because she was sent home, he must have been in a closet ever since.

Jean Padgett, a member of the knitting and braiding group, offered to complete the embroidery, which had been started before he was born.

She said: ‘All the original silks and necessities were with it. I thought about how long it had been started and for some reason, I don’t know why, it wasn’t finished.

“I felt privileged to finish it.”

Jean, from Aspull, embroidered the verse in the middle of the piece and finished the work started on the border.

She said: “It was nice to finish it. I also washed it very carefully because I didn’t want to tear it. I was really careful with it.

The embroidery celebrated the Queen’s coronation in 1953

“Kathleen, the manager, had it put in a frame, ready to be sent to the Queen.”

Before the embroidery was sent to Her Majesty, Jean met Julie for the first time to show her the finished piece.

Julie said: “I’m glad it’s over. I never thought I’d send it to the queen, but I think it’s a good idea.

“I think my mother would be very happy.”

The unfinished embroidery was found in an envelope dated 1953
2022-05-29
Previous Post: A World of Warcraft player makes his raid team’s crochet dolls
Next Post: 90s crochet bucket hats made by NI crafter that are a big hit with fashion followers