In the early 1990s, I began traveling regularly to Banaskantha in Gujarat, developing garments and upholstery for the Self Employed Women’s Organization (SEWA) with the local craftswomen. Most were pastoralists, living in villages within a radius of 100 kilometers, their husbands being mainly agricultural workers or cattle herders.

The area was a desolate, salty desert, subject to periodic droughts, extremely poor. Radhanpur was the nearest town. In one section, connected by winding alleys, were the dark little houses of the Mochi community. Traditional shoemakers once employed by royalty, they were now dangerously poor as fewer and fewer people ordered their beautifully embroidered leather. Juthisfavoring industrially manufactured branded shoes, even plastic sandals.

The advent of the automobile also marked the demise of their elaborately embroidered leather ornaments for elephants, horses, and camels.

In order to make a living, the Mochis turned to making generic embroidered wall hangings and decorative pillows – in fabric rather than leather – for local traders and GURJARI, the Gujarat State Handicrafts Corporation. Few other employment opportunities existed.

As is customary, the men cut and sewed the items and the women filled in the embroideries, using the traditional aari-like a cobbler’s hook or awl, mounted on a wooden handle, unlike chain stitch embroidery done in northern India using a straight needle and working on a large frame fixed to the floor .

Similar Mochi communities existed in Bhuj and Mandvi in ​​Kutch, as well as Saurashtra and Sind. In fact, many Mochi families traced their pedigree and craft to Sindh ancestors who were brought to the Kutch court by the Kutchi rulers in the 14th century and encouraged to teach their craft locally. Bhuj, as the seat of the Kutchi royal family, was the largest center of Mochi embroiderers, now sadly reduced to a handful of families. A few beautiful old carved wooden houses, relics of better days, and some fine tombs, temples and mosques relieved the dusty poverty and clutter of small towns.

Working on fabric was not new to the Mochi community. In the past, too, the most skilled craftsmen custom-made beautiful garments, accessories, awnings and wall panels in silk, satin and mash potatoes for the local nobility, and even for more distant royal patrons.

The work was extraordinary, the aari used as a miniaturist’s brush; embroidery, delicate configurations of foliage, flora and fauna – peacocks and parrots for fertility; elephants, lions and horses for power and wealth; decorative borders overflowing with roses and lilies and flowering trees rarely seen in these dry climates.

Verdant trees of life were a popular theme, as was Sri Nathji pichwais who stood behind the deity in temples. Extraordinarily fine workmanship was done on both leather and fabric until the 20th century, declining after independence, coinciding with the decline of the Nawabs and Maharajas who were their patrons.

It is these Mochi embroideries, mainly from the beginning of the 19th century, which are the subject of The cobbler’s stitchthe latest documentation of TAPI’s wonderful textile collection.

Shilpa Shah, co-founder of the TAPI collection of Indian textiles and art, is also a co-author of this book. His inspiring work, collecting and documenting Indian textiles, followed Gira Sarabhai and the Calico Museum in the 1950s and 1960s. His travels throughout India and his master’s degree at the University of Berkeley gave him both knowledge academic and personal, as well as passion and love.

Its co-author is Rosemary Crill, a former senior curator at the Victoria & Albert Museum in London, who has studied and written about Indian embroidery and textiles over the years. Their combined expertise and scholarship make this book an intensely enjoyable read – both visually and in content. On the other hand, Niyogi Books did a wonderful job of photography, printing and design. The cobbler’s stitch it is a joy in everything except its considerable weight!

The book documents items from the collections of the Royal Family of Kutch, Dhangadhra and Jaipur, the V&A and other Western museums as well as pieces from the TAPI collection itself. It is superbly illustrated: the rich, vivid reds, greens and yellows and ornate, highly intricate patterns of Mochi embroidery, often boldly outlined in black, emphasizing their difference from the more subtle and delicate chain stitch influenced by the Persians and Mughals. from northern India and Bengal.

Even the pieces commissioned for the European market have a distinctive difference with the crewel work of Kashmir or the painted chintzes of the Coromandel coast. As Shah points out, Mochi embroideries found their way to courts and temples all over India and as a result were often misidentified as local work. To a trained eye, they’re very different, both in imagery and execution. 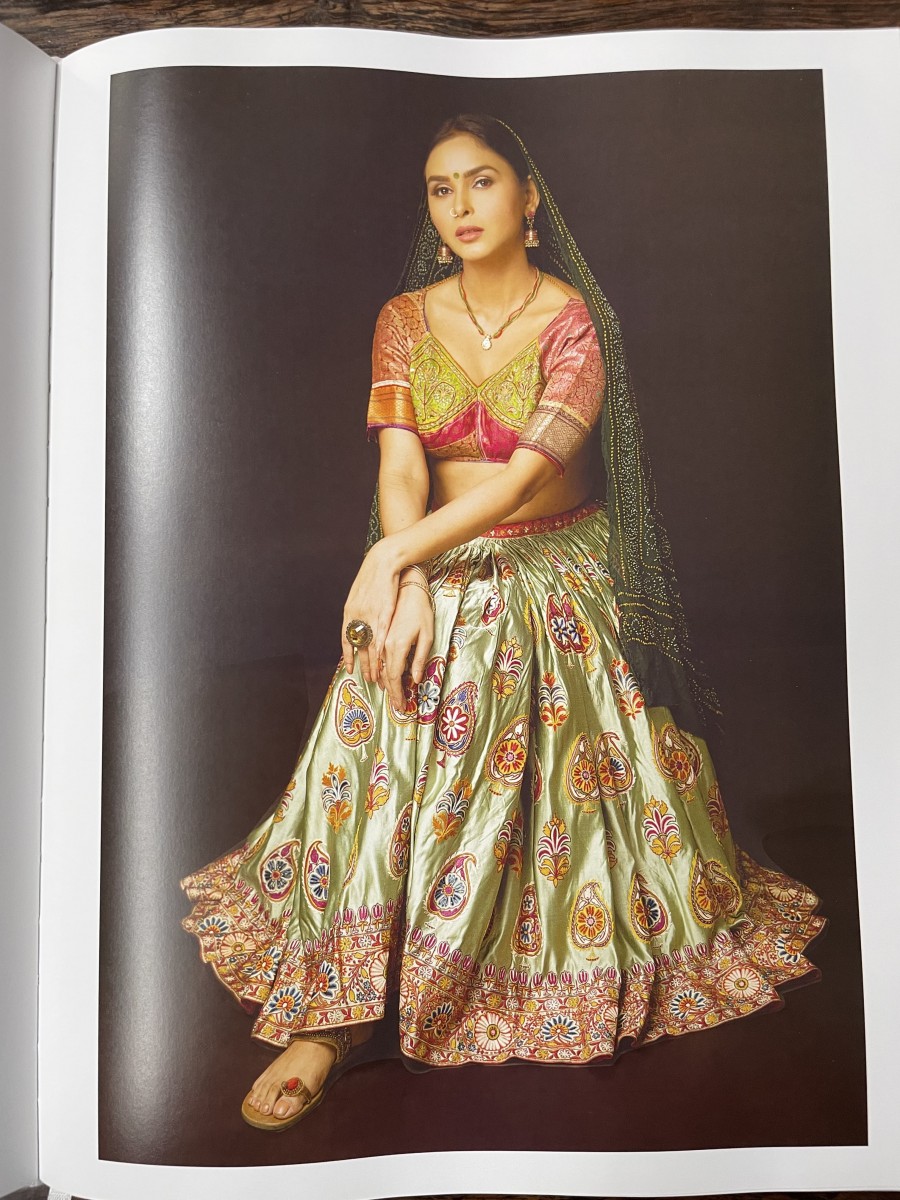 An image from the book showing a woman wearing an embroidered Mochi cloth outfit.

Looking at ancient craft and textile traditions, it is easy to fall into despair about their current status. However, all is not gloomy, since the last chapter of The cobbler’s stitch tell us.

There has been a revival of aari bharat, and many designers and practitioners make wonderful contemporary pieces, though not always made by traditional Mochi embroiderers. Asif Shaikh, Arun Virgamya, Adam Sangar and their extended families, the Shrujjan Museum and Shobhit Mody are a few that come to mind.

Working with embroiderers Mochi, Ahir and Meghwal in Radhanpur, SEWA and Dastkar have produced beautiful wall hangings that have found their way into many national and international museums and venues, often combining the three local textile skills of patchwork, mirror and aari bharat.

Mochi Bharat is no longer the preserve of male artisans, but has given hundreds of women independence and income, adding yet another important dimension to the practice.

Laila Tyabji is a crafts activist and founding member of the DASTKAR Society for Crafts & Craftspeople.

2022-08-10
Previous Post: The best crochet tops for a vintage revival this summer
Next Post: The incredible art of contemporary embroidery from Japan | Art