Hanoi (VNA) – Nguyen Quoc Su, a 79-year-old embroiderer who has practiced the craft for more than 60 years, still works on his embroidery loom every day, helping to preserve and promote the nation’s traditional craftsmanship.

Su was born in 1942 in Khoai Noi Village, Thang Loi Commune, Thuong Tin District, Hanoi, considered the “cradle” of traditional embroidery crafts. For more than 400 years, craftsmanship has been preserved by local populations and passed on to younger generations.

Su said he has known about embroidery frames and colored threads since he was little, even before he was taught to embroider. Su officially learned the craft when she was 13 years old, and time has nurtured her love for it.

With his skilled hands and thirst for learning, he was only 16 when he started working as a technician at the Hop Tien Embroidery Cooperative, becoming the youngest worker there.

Su now owns Quoc Su Handmade Embroidery JSC in Thang Loi Township, which has an office in Hoan Kiem District, Hanoi. They are prestigious sources of beautiful handmade embroidery pieces for those who love craftsmanship.

The company is not only famous in this country but also in foreign markets. Its products are exported to many countries and territories around the world. 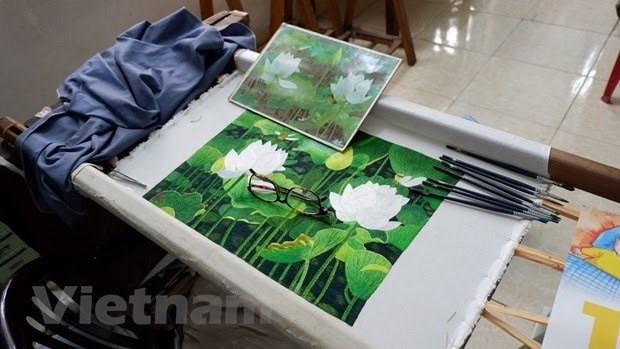 Thanks to Su’s skillful hands, the embroidery products made there are different from those made elsewhere. Each product is a sophisticated work of art. Due to the demand for such intricate items, Su is still working hard to meet the demand, even though he just turned 79.

With over 60 years of experience, Su has embroidered many fun works. He had presented his products in many competitions and exhibitions around the world, helping to promote the beauty of Vietnamese culture to international friends.

With the work “The House on Stilts of Uncle Ho”, presented at an exhibition in Russia in 1980, Su received an award for scientific and technical innovation as well as the Order of Lenin by the General Secretary of the Central Committee of the Communist Party of the Soviet Union. Union, LI Brezhnev.

The old craftsman still has concerns about how best to preserve the traditional craftsmanship (Photo: VietnamPlus)

Su’s embroideries are not only harmonious in color, but also precise and smooth down to every stitch.

Encouraged by the general secretary, Su took a painting course at the central college of fine arts. In 1975, Su started embroidering Uncle Ho’s portrait after graduating from the training course.

Whenever he talked about his first embroidery portrait, which is also his favorite embroidery, Su was always moved.

The work made him famous in all the northern embroidery villages at that time. More than 40 years have passed and the embroidery portrait is still placed in the living room of his house.

The landscape embroideries made by the old craftsman also have an irresistible charm.

Su said creating landscape embroidery is like writing, your stitches should express the soul of clouds, sky and wind.

Since the outbreak of the COVID-19 pandemic in early 2020, the craft has been badly affected, but Su has always made every effort to keep her cooperative running.

In recent years, Su and her family have held free embroidery classes for those who wanted to learn.

With his mastery of the craft and his enthusiasm for the craft, Su has trained many generations of good workers. Some graduates were able to open their own embroidery studio while others were recruited to work at Su./’s studio.