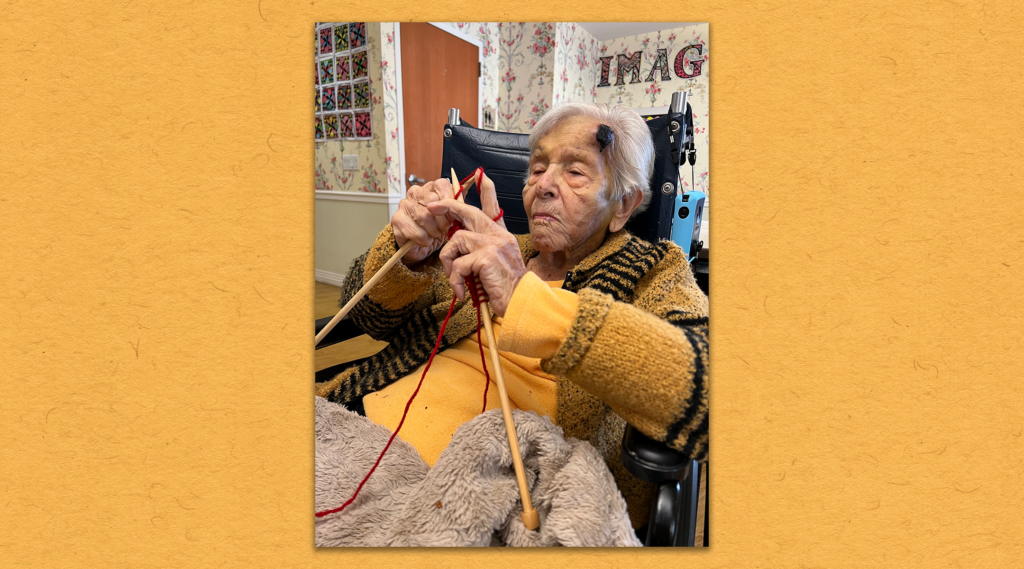 (New York Jewish Week via JTA) — A recent fall meant Rose Girone spent her 110th birthday in a Long Island rehab facility. But nothing could stop her friends and family from giving her exactly the right gift: red yarn and brand new knitting needles.

Dina Mor, owner of The Knitting Place in Port Washington, New York, was among the guests to join Girone for the January 13 birthday celebration that transformed her dear friend, mentor and former employee into a supercentenarian – the official term for someone who lives at 110 and beyond.

Girone’s passion for knitting has made her well-known in the New York-area knitting community over the past few decades, but she was also instrumental in her family’s survival earlier in her life.

Girone (née Raubvogel) was born in 1912 in Janov, Poland. After a brief move to Vienna, the family settled in Hamburg, Germany, where they ran a theatrical costume shop. She loved playing there, especially sliding down the ramps of the two-story building. In Hamburg, Girona learned to knit from an aunt, according to Bennicasa, and she liked it immediately.

Rose married Julius Mannheim in an arranged marriage in 1938; later that year, the couple moved to Breslav, Germany (now Wroclaw, Poland), as did the Nazi pogrom known as the Kristallnacht unleashed waves of violence against the Jews of Germany. Mannheim was arrested and transported to Buchenwald concentration camp and Girona, eight months pregnant, briefly fled the city with her mother and uncle to stay out of harm’s way.

Alone and scared, Girona was determined to get out of Nazi Germany. She found a brief window of opportunity when, in 1939, her cousin, Richard Tand, sent her a paper he called a visa, written in Chinese. Shanghai was one of the last open ports in the world and Girona presented the visas to the Nazi authorities and was able to have her husband released from Buchenwald.

As Bennicasa recalls,They let my father out on the condition that we pay them and leave the country within six weeks, and we did.

They were allowed to leave with 10 reichsmarks – around $40 today – and no valuables or jewelry. After a month-long voyage aboard a German liner — which required Jews to dine and swim separately from non-Jewish Germans — the young family arrived in Shanghai.

Conditions in the Chinese city were difficult. The family swapped the linens and trinkets they had brought with them and then had to depend on help from relief agencies. Eventually Mannheim found work as a taxi driver. Girone remembers having lived with “heaps of noodles”, according to her 1996 interview with the USC Shoah Foundation.

However, Girone was able to find wool and she knitted clothes for her granddaughter. An enterprising Viennese Jewish man saw her designs and thought she could put her talent to good use, earning them both money. He invited her to sell her work, saying he would teach her the business. Together, they brought her knitwear samples to a high-end store in Shanghai where the shop owner suggested ways to make the pieces more stylish. Girone took the feedback on board and started designing and knitting sweaters, with the help of Chinese women, as a way to earn a living.

Rose Girone’s family was forced by Japanese occupiers into the Jewish ghetto in Shanghai, seen above around 1943. (Wikimedia Commons)

Knitting was more than a much-needed source of income: she credited her co-workers with giving her the strength she needed to survive. Girona, according to Bennicasa, “lived a sheltered life in Germany. The other women in Shanghai made her stronger.

In 1941, Nazi-allied Japan, which occupied parts of China, forced Jewish refugees into a one-square-kilometre ghetto in Hongkou, the poorest part of Shanghai. The Girone family moved into a small room under a staircase that once served as a bathroom. There was a single bed for the three of them; the mattress was infested with cockroaches and bed bugs. The rats crawled through the hardwood floors and climbed over the family while they slept.

There was a bright spot in ghetto life: in one of the Heims, or community houses created for refugees, a rabbi would give inspiring sermons to the community. “He was a fabulous speaker and I always stood in line to hear him,” Girone said in the Shoah Foundation interview.

The last years of the war were filled with frequent bombardments. “It was really awful,” Girone continued. “I was panicked.” Bennicasa remembers playing with hot shrapnel in the streets after the air raids were over.

Fortunately, another trip would provide refuge. In 1947, the family obtained a visa for the United States. Girone insisted on completing its knitting orders before setting sail. “I had to finish what I promised,” she said.

Again, there were limits to what the family could take. Each person was only allowed to leave China with 10 dollars, but Girone hid $80 in cash inside the buttons of his hand-knit sweaters, according to a post by Patch on his 99th birthday. They traveled by boat to San Francisco, eventually ending up in New York by train where they reunited with Girone’s mother, brother and grandmother, all of whom had survived the war.

The couple and Bennicasa, then 9, moved into a hotel as part of a refugee settlement program. Girone was determined to help support her family. She found work as a knitting instructor, but her husband doesn’t have the same motivation. After years of Girone urging him to find his place in America, they divorced.

In 1968 she met and married Jack Girone and they moved to Whitestone, Queens. Rose Girone thrived as a knitting teacher and cultivated her own knitting community. She soon opened a knitting shop in Rego Park, Queens, with another knitter; soon after, they expanded to a second location at Forest Hill. 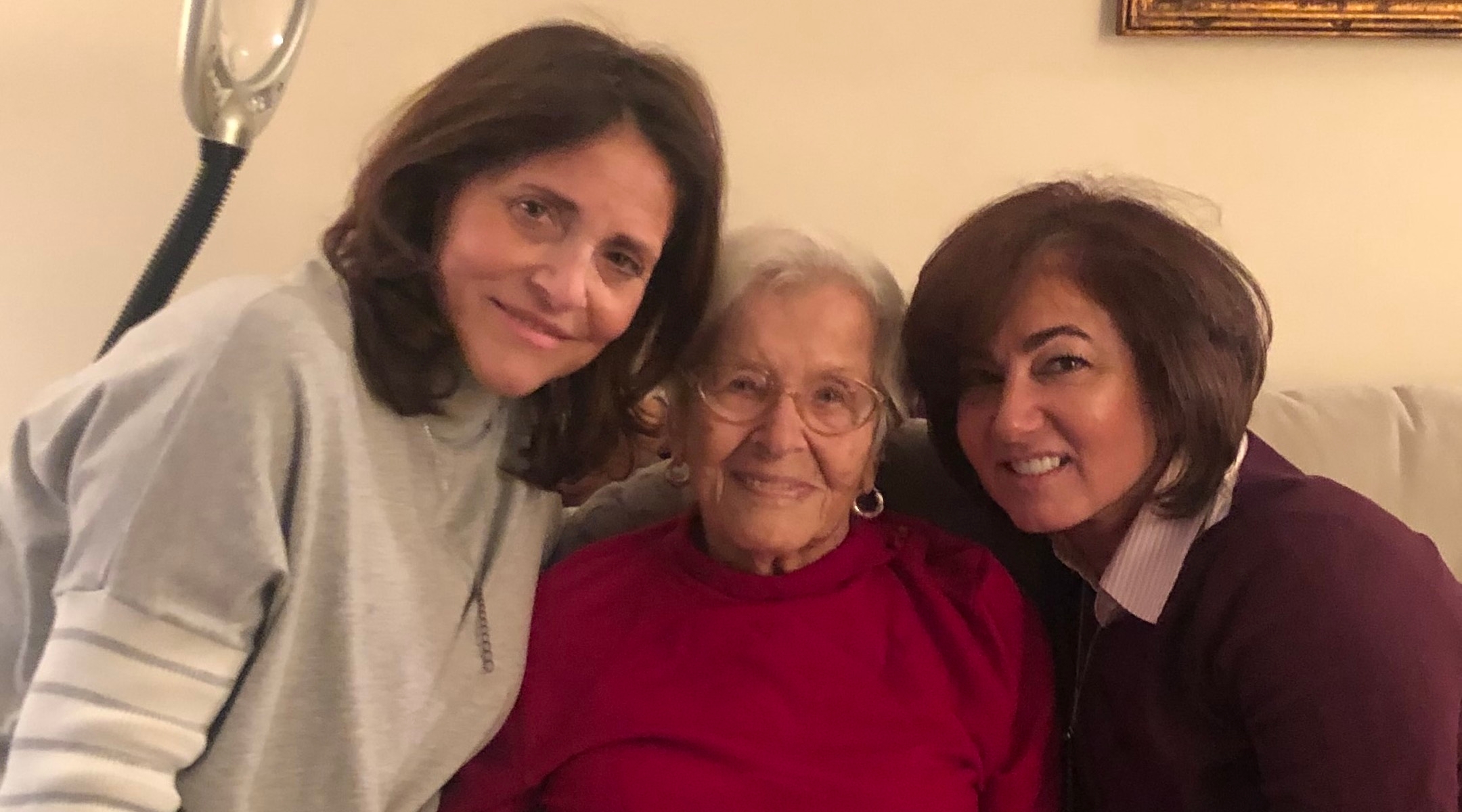 After a year or two, the partners separated and each kept a store. Girona’s design expertise has made its Austin Street store stand out.

“Mother was quite proud of all her creations,” Bennicasa said. “People would bring in adverts from Vogue and such and say they wanted something like this particular photo. Some with intricate designs, Mother would sit, guess, often with grid paper. She loved it.

When Girone turned 68 in 1980, she sold her business. But she never stopped knitting. She started volunteering at a non-profit knitting shop in Great Neck – where Girone first met Mor.

One day, according to The Knitting Place Podcast, Mor arrived at the store; she was struggling with a sweater she was knitting for her husband, Erez. Girone offered to rip off the back panel and urged her to distract herself at an adjacent cafe so that “it hurts less” to see her stitches unwound.

Girone took great pains to help Mor improve his knitting technique, and the two became close. “Mother saw that Dina had a knack for knitting, so when Dina expressed that she would like to open her own store, she was happy to help,” Bennicasa said.

Even after retiring from Girona five years ago, the two remained close. On a visit last fall, Mor recalls, the first thing Girone said was, “How’s business?”

Mor’s affection for Girona runs deep. For her 100th birthday, she commissioned a surprise painting of Girona in the center of a table at The Knitting Place, surrounded by her friends and student knitters.

“Looking at it gives [my mother] memories and makes her feel good,” Bennicasa said.