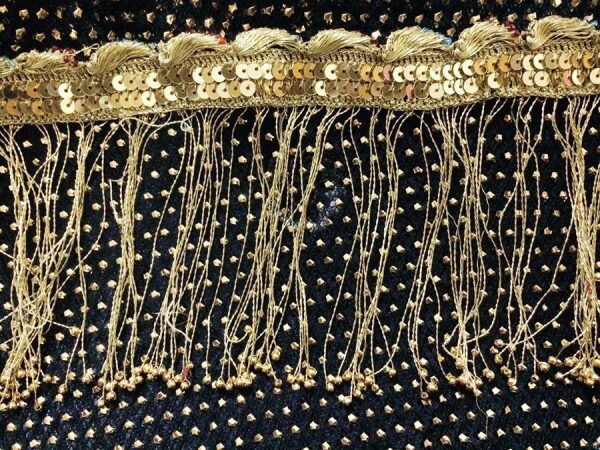 TEHRAN – One of the most common Hormozgan handicrafts is Khos-duzi, a type of embroidery created for local purposes.

Khos-duzi consists of sewing thin strips of Khos or Naqdeh on thin lace. The bands are arranged in geometric, cursive, arabesque, ‘Danehee’ and ‘Kheshti Payeh Boland’ designs and patterns.

Besides lace fabrics, Khos-duzi can also be applied to velvet. Velvet stitches are applied using a type of needle called a chenille.

The history of this craft is unknown, but it is certain that this craft was very popular in Bandar Abbas and Baluchestan during the Safavid period (1501-1736).

After the Safavid period, efforts were made to improve this embroidery, which gave it its finest appearance.

The most common patterns in Khos-duzi are hexagonal, octagonal and dodecagonal stars. Others include honeycomb patterns, stars, hearts, leaves, flowers and bricks.

It is not necessary to draw the patterns on the fabric, because the patterns of this craft are so simple, and the seamstress stitches according to her taste.

The fabric looks exactly the same on the front and back and is especially shiny if sewn neatly and neatly.

The threads used in Khos-duzi are made of gold or silver and are known as Khos threads. Hence, this handicraft is known as “Khos-duzi” which means khos sewing.

Khos-duzi and other handicrafts such as golabatoon and sequins are often combined by these artists to create unique items.

Known as the province of the islands, the province of Hormozgan is located on the northern shores of the Persian Gulf. It includes picturesque islands among which Kish, Hormuz, Hengam and Qeshm are the most beautiful and major tourist destinations in southern Iran.