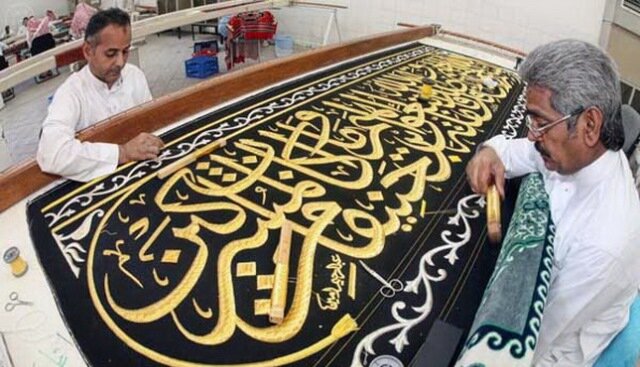 One of the most beautiful traditional embroideries in Iran, which dates back to the Sasanian era, is “Dah-Yek-Douzi”.

“Dah-Yek” literally means a tenth of something and is a kind of embroidery where the needle and thread penetrate a stitch ten times or ten plies of thread are attached to the fabric by a special type of tie.

This method of embroidery creates a special view and creates a relief vision. Dah-Yek is used to adorn the margins of garments, “Sofreh Ghand” (a piece of linen on which sugar is arranged for ceremonies like weddings), mirror frames, exquisite curtains, fasces, covers heads, decorative paintings, the cover of the Holy Quran, money bags, pencil holders and many other objects.

As for Dah-Yek’s story, since its main material is Golabatoon Yarn, its story has intertwined with Golabatoon’s story.

The importance of the decoration of military and official clothing reinforced the art of Dah-Yek and, together with the products in which gold threads were used, the Dah-Yek was considered one of the export products of the time.

In Islamic times, after Iranian artists from the city of Susa and Shushtar were commissioned to prepare twelve pieces of curtain for Kaaba, they started using Dah-Yek art to adorn curtains.

In addition, this embroidery adorned the covers of sacred shrines. The Safavid dynasty witnessed the flourishing of Dah-Yek, and it was during this time that artists began to sign and sew their names onto their creations.

In addition to the highly detailed curtains and fasces, interesting paintings have remained from the Safavid era that showcase the unique skills and abilities of Safavid artists now housed in museums.