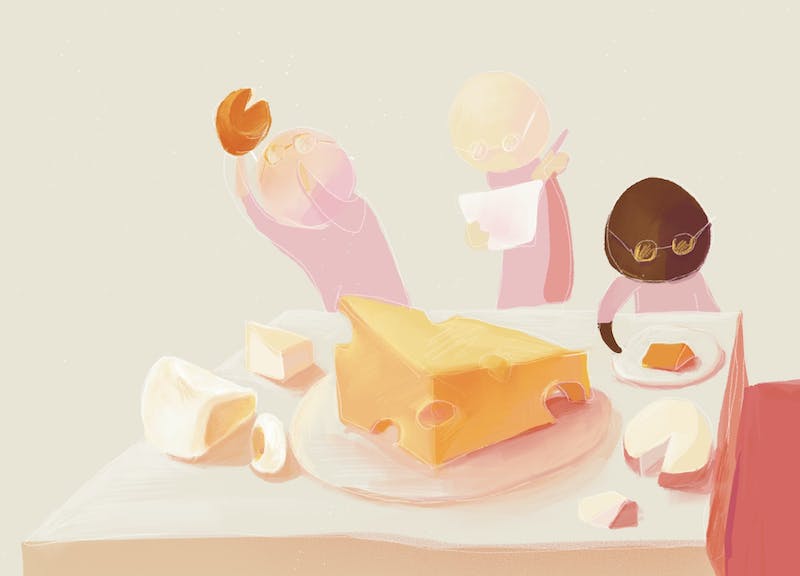 From cheese fondue to crocheted cows, residential college committees have their own ways of upholding their particular college culture. The Thresher spoke to a few unique committees on campus that present the full range of opportunities for college governments.

Cheese connoisseur Brian Lee, a Hanszen College junior, has been nominated by his friends to bring back the Hanszen College Cheese Committee after its hiatus in 2020. According to Lee, the Cheese Committee previously held one to two cheese-related events per year. Lee enlisted Emery Engling, a sophomore at Hanszen, as a fellow cheese master to bring the committee back to Hanszen College. They said they have events about once a month featuring cheese in all its forms (fondue, mozzarella sticks, etc.).

The Cheese Committee, according to Engling, also partners with other Hanszen Committees to host a variety of events, including a “Cheese x Trivia” night and a “Cheese x Cider” event with the Hanszen Brewing Committee. Even with the frequency of their events, the supply of cheese often runs out within half an hour, according to Lee.

Lee’s favorite part of the committee is the range of people he interacts with.

“The best part for me is meeting a lot of people,” Lee said. “I’ve met a decent number of lower class kids, a few upper class men, just helping organize cheese events and just trying different types of cheese. There is always a really cool experience.

Engling, on the other hand, said cheese was her favorite part.

Two sophomores from Sid Richardson College, Evelyn Chiu and Anuska Santra, create a community with Sid Knits, Sid’s own knitting and crocheting committee. Sid Knit’s was started last year by Sid’s former magister, Melanie Achard, according to Chiu. However, when it was announced that the Achards were leaving Sid, Chiu said she decided to continue the tradition and make Sid Knits a committee.

“A lot of [people] are busy all the time and [Sid Knits] was a place for them to gather and meet people,” Chiu said. “I really liked that environment, so I just wanted to keep it that way.”

Santra said that after learning to crochet from Sid Knits, crochet became an important coping mechanism as they navigated their freshman year.

“Crocheting made me feel more independent, and it made me feel like I could be alone without feeling lonely,” Santra said. “I wanted to keep the infrastructure for [Sid Knits] up and also hopefully give this to someone else.

According to Chiu, Sid Knits meets weekly, providing a space for those with experience to perfect their craft and for beginners to learn.

Yuv Sachdeva, a sophomore at Jones College, said he was one of two ambience coordinators at Jones, along with Lauren Yu, a position dedicated to improving spaces and the general physical environment. of Jones. (Editor’s note: Lauren Yu is Thresher’s backpage designer). According to Sachdeva, the position was not very active in the past, their only project was to get new lecturers for the college, even though the committee has been around for several years. Also, he said there was no committee in the past, just the two coordinators. According to Sachdeva, the committee wants to focus particularly on requests from Jones students in their projects this year.

“A lot of Jonesians [would] I love seeing fairy lights in the Commons or I would love to see their [floor] lobbies have improved.

Sachdeva said the position was particularly important to him because of the impact of his physical environment on his well-being.

“We all live in Jones year-round, so if the space isn’t appealing, [it] doesn’t look like a welcoming environment, then it can really affect your well-being,” Sachdeva said. “Also, we believe that [the ambiance committee] is a way to… give everyone a chance to have a say in what would make them feel better about Jones.

Thanks to the Hanszen College Skeleton Committee, it’s Halloween all year round in the Hanszen Commons. The Skeleton Committee began last year when 12-foot-tall skeleton Harry Femur found his home at Hanszen College after a year-long acquisition process due to stock-outs in Houston. The current chair, Christina Wong, a sophomore at Hanszen, says the main responsibility of the skeleton committee is to look after the skeleton.

“We put the skeleton together and… we dress it up,” Wong said.

This year, Wong said the Skeleton Committee plans to create additional costumes throughout the year, including various famous Harrys, such as Harry Styles and Harry Potter. For Halloween, Wong said the costume was selected by popular vote in the Hanszen GroupMe. Once the choice has been made, the committee and anyone wishing to join it work on making the costume.

“When we get together with a group of people to make these costumes…it’s a really good bonding experience for everyone involved,” Wong said. “I remember last year [the skeleton committee] offered service points to help with the costume, but there were swarms of freshmen, all helping, all contributing.

2022-09-14
Previous Post: What you need to know about this cute DIY
Next Post: New York Embroidery Studio is the latest embellishment company