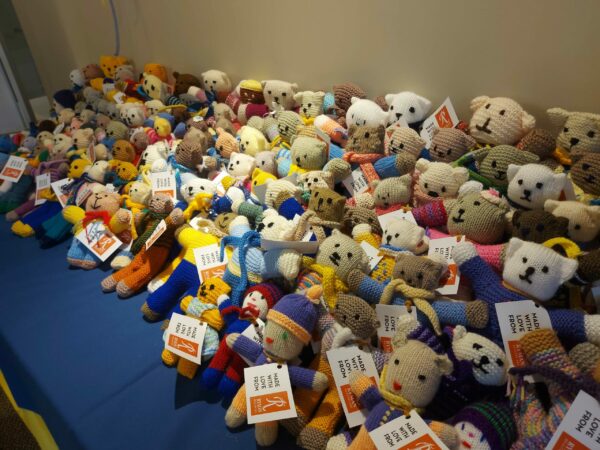 Residents of the Bruce McLaren Retirement Village are making handmade teddy bears to send to displaced children in war-torn Ukraine.

They are one of 45 Ryman Healthcare villages taking part in a cross-Tasman bear-making mission to make 20,000 knitted teddy bears, joined by team members in villages and corporate offices in Christchurch, Auckland and Melbourne.

The idea originated with Ryman’s sales and community relations manager, Debra Richardson, who took in a Ukrainian boy named Yuri after the Chernobyl nuclear disaster in the 1980s.

The project grew out of her discussions with Yuri, who is now based in Ukraine, about how Australians and New Zealanders could provide support.

Bruce McLaren Retirement Village’s group has so far knitted over 204 teddy bears with more on the way.

Following the devastating events in Ukraine, thousands of children were evacuated to other countries, or found themselves displaced or stranded at the Ukrainian-Polish border, according to Ryman Health Care.

So far they have hit the mark of 5,000 bears produced overall.

The public and local communities are encouraged to get involved in the project.

Ryman will provide anyone interested with a simple teddy bear pattern, instructions and creative suggestions for knitting a “Yuri Bear”. Non-knitters can donate yarn to the cause.

Completed Yuri Bears can be dropped off at the nearest Ryman Village.