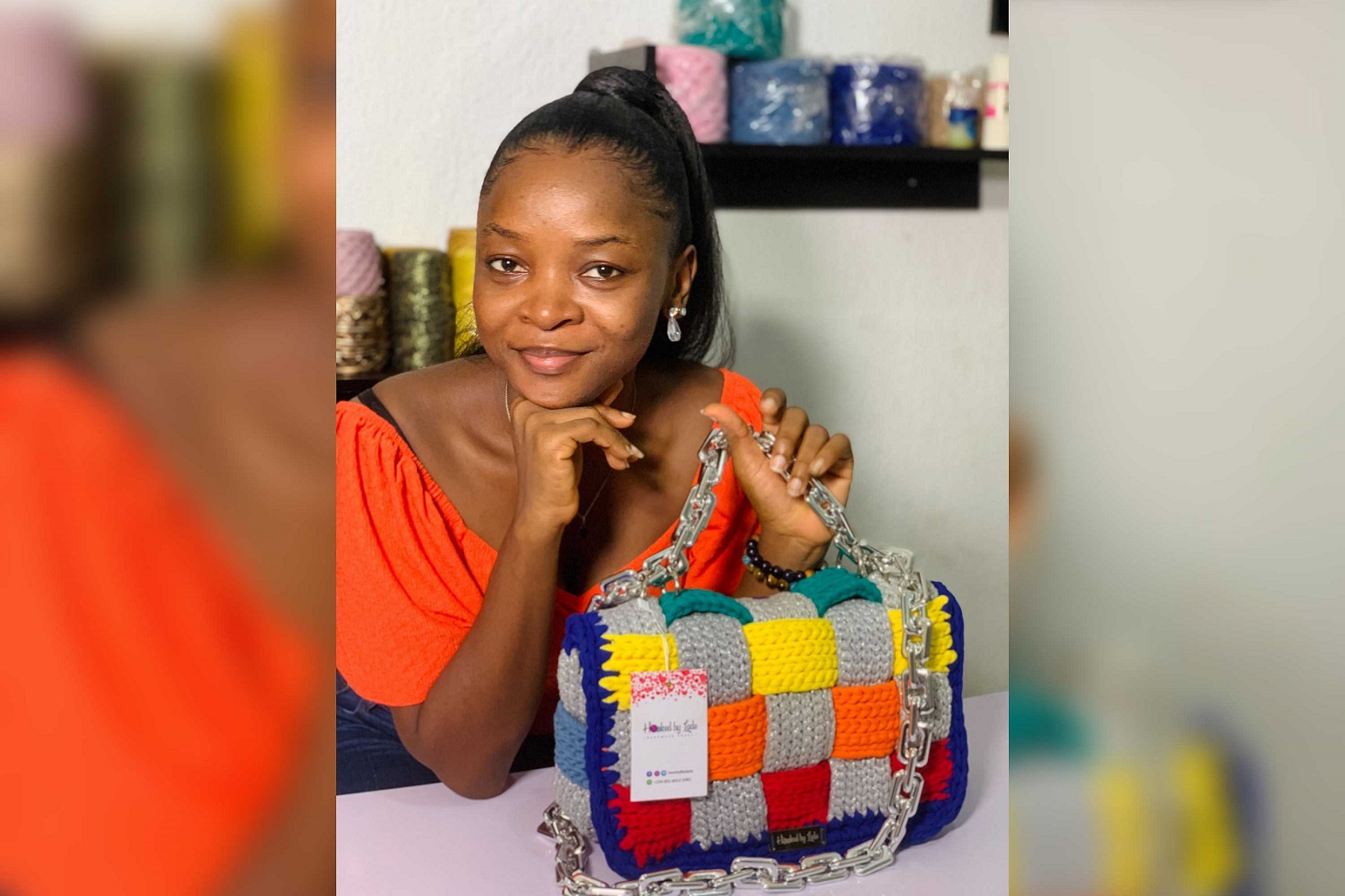 Knitting and crochet have long been confused, for as long as we can remember. People crocheted and called it knitting. I learned to crochet in the fine arts program in high school, but it was called knitting. At some point, we’ve all switched knitting and crocheting. But one thing we can agree the two have in common is the beauty of the craft. It’s no wonder Omolade Kolade Mayowa decided to pick up a crochet pin and some colorful yarn.

Omobolade is a crochet artist who defines herself as a crochet architect. She is the founder of HookedByLade, a luxury crochet bag brand based in Lagos, Nigeria. Lade learned knitting at a young age from a neighbor. “She [the neighbour] would knit yarn into belts, using brooms. It was fascinating. So I asked him to teach me,” she recalls. “We often sharpened brooms to use as knitting pins.” It became a hobby for Lade at the time. Later, she started studying architecture at school. While in school in 2015, she discovered Fiverr, a freelancing platform, and started what would become her first experience in entrepreneurship. She began working on her own as a writer and progressed into animation and software development. “If I wanted to pivot to technology, I could. There is money in technology. But I don’t know if I’ll be happy to do it, ”she notes.

Lade never imagined she would be interested in textiles. Her passion for knitting only resurfaced after she was inspired by nature during her year of service in 2017. Lade was assigned to teach in a small local government community of Ahoda West in the state of Rivers. Seeing that she had plenty of time to spare, she resumed knitting. “I was enjoying a different landscape; gentle breeze and tranquility. It seemed like the perfect setting to get back into gear,” she says. In no time, she had the children of the village come to learn the trade. She taught them using the broom method. “They [the children] made fun. I would research different stitches like crocodile stitch and present it to them every time they came,” she recalls.

She returned to Lagos after her service and began working remotely for a construction company based in Dallas, Texas. It seemed like a dream job, especially since it marked the start of his career. But after almost two years of working with the company, she quit. “It didn’t come as naturally to me as it should have,” she says. She decided to focus on freelancing because it was going well. With more time to spare, she resumed working with threads. Only this time it was with a hook, a hook. And she was determined to grab him by the horns. “I said to myself, it has to work. So, I got to work,” she says.

The architect of the crochet bag

When Lade started HookedbyLade, she didn’t know what to expect. Her first set of bags did not sell. So she decided to invest in improving her art and creating better products.

HookedbyLade bags are vibrant, intricate and sophisticated. However, creating such high quality products takes time and often starts with customer consultation. “I get to know my clients and note their style and preferences. So I can work better for them. It’s the architect in me that comes to play,” she says.

Because bags take a lot of creativity, Lade does her best to avoid repetition as it can kill creativity. “I always try to filter the projects I take on. I often use creative ways to serve customers. Even when they ask for a viral design, I suggest ways to make it unique. It’s even better when a client tells me to be free with my creations,” she says.

After designing the products, Lade moves on to the production phase. The manufacture of bags requires the use of quality materials. The wires should be of good quality to avoid weak and bobbly products. But sourcing quality yarn in Nigeria is difficult. “I wish I could say I’m using locally produced yarn. Unfortunately, it is not the case. It’s hard to find quality yarn made in Nigeria,” says Lade. Lade must import quality threads. In 2021 alone, Nigeria imported horsehair yarn, wool and fabrics worth $259.12 thousand.

Some bags take up to eight hours to produce. Others can take up to four days. “It depends on the style and the size. Big bags take longer. But I love working on big bags. And most of my clients ask for large sizes,” she notes.

Lade concludes each product with a video. “I like to make videos of my bags. When I finish a bag, I want to showcase it so the buyer can be proud of it,” she says. Her videos are created with Instagram Reel, a feature that, according to she, was launched at the right time for her brand. It takes about two hours to get the right shots and video clips, even with the help of her brother. “I don’t do videos for every bag, but I do my best to be consistent,” she said.

The HookedbyLade team includes Lade herself, a business developer, and her brother, a web developer. Lade designs and crochets on his own, and at some point the requests were overwhelming. “I was getting so many requests. And it seemed like I was selective about who got their bags. So she started a 30-day waiting list. “It was easier to establish the waiting list. Customers can see their number go up in the queue,” she says. Its bestseller, the Comfort Bag, a $150 royal blue bag with silver accents, has 651 waiting lists. “I’ve been lucky to have patient people who understand the value of what they’re getting,” she adds.

Like most companies, HookedbyLade has had its share of hassles, especially with only a few luxury crochet companies serving an existing pattern. “Each situation presents its own set of challenges. Initially, it was about getting my customers to trust me enough to pay before production started. Especially those from abroad who are my main clientele,” she says.

Lade also had to deal with difficult customers. “I once had a situation where a US-based customer had a delayed order. I granted his refund request. But when the bag reached her, she refused to return the chargeback. I was quite hurt. I had just started the business and every penny was important,” she says.

Yet the most important factor for HookedbyLade is maximum customer satisfaction. “Even if we have a hundred requests, each customer must be satisfied. It doesn’t matter how much the customer pays,” she says. “Three years from now, customers should be able to remember the service they received from HookedbyLade. It is very important to me,” she adds.

Lade is in the early stages of building her brand. And it hopes to evolve to include an academy. “A lot of people want to learn how to crochet. I get emails from mothers saying I should teach their daughters. But I’m just one person. I can’t risk producing inferior bags because I took more than I could handle. It takes passion and dedication on the part of both teacher and student to get it right,” she said.

According to her, a business like hers must be based on passion, hard work and dedication. “A year ago, I never would have known the brand would be where it is today. It seemed there was no market for crocheted bags. It was not requested. But I went from 500 followers to 265,000 followers on Instagram and a current waiting list of over 1,300,” she says. The brand also has a sister brand – the HookedbyLade store for crochet tools and accessories. HookedbyLade has been featured on platforms such as everyday fashion bomb and can be seen on the arms of movie icons like Sola Sobowale.