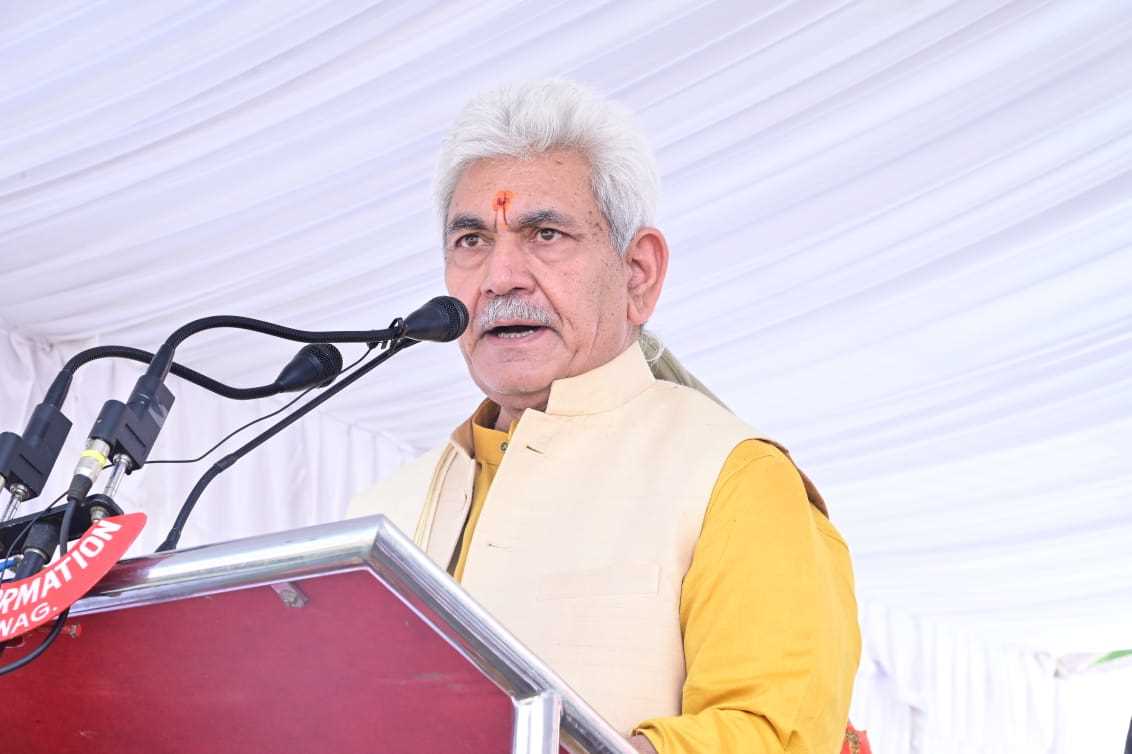 Lieutenant Governor Manoj Sinha today inaugurated the SFURTI Martand Chainstitch and Crewel Embroidery Cluster Joint Facilities Center at Ranipora, Mattan in Anantnag.
The cluster was established by the J&K Khadi & Village Industries Board (KVIB) with the financial assistance of Rs 4.50 crores under the Scheme of Fund for Regeneration of Traditional Industries (SFURTI), intended for the development of clusters to make traditional industries more productive and competitive.
Congratulating KVIB and the artisans on the occasion, the Lieutenant Governor said the new facility will meet the needs of 5,000 artisans with a multi-pronged intervention for capacity building, skill development, design and product development and market development.
This cluster will bring tremendous change and prosperity to the lives of many artisans who are a vital component of our society, keeping alive the priceless elements of our rich culture and tradition, he added.
J&K is known for its exquisite craftsmanship and craftsmanship. With the active support of the central government, the UT administration is extending all possible support, providing market linkages so that centuries-old pristine craftsmanship is preserved in its true essence, the Lieutenant Governor added.
Appealing to government initiatives to make traditional crafts more remunerative and lucrative for the craft community, the Lieutenant Governor said the concerted efforts of the Khadi & Village Industries Commission and the J&K Khadi and Village Industries Board to revive village industries, loom and handicrafts set a new record for J&K in terms of growth and employment.
By 2021-22, under the PMEGP, KVIC had established 21,640 manufacturing and service units, well ahead of other larger states. As many as 1.73 lakh of new jobs at J&K were generated in the fiscal year 2021-22 under the PMEGP, which is also the highest of any state and UT in the country, Lt. -governor.
Under KVIC’s PMEGP, 52,116 units were installed from 2014 to the last fiscal year, compared to only 10,401 village units established at J&K between 2008 and 2014.
Further, the limit of financial assistance to handicraft artists through Artisan Credit Card has also been increased from Rs One lakh to Two lakhs, in addition, 2118 handicraft artists have benefited from Mudra Yojana and 26 units have been created under the Karkhandar program, which will be increased to 50 by the end of this year.
Developing entrepreneurship through training and capacity building ensures product quality and drives global demand for J&K craftsmanship, the Lieutenant Governor observed.
GI certification for seven crafts including carpets, pashmina, sozni, khatamband, walnut wood carving, papier mache, Kani shawl has been done, and 1.55 lakh craftsmen have been trained in 432 training centers. Now artisans have easy access to bank credit to overcome their working capital problems, he added.
The modernization and upgrading of the government silk weaving factory in Rajbagh, Srinagar is another important step taken by the government towards the revival and holistic development of the silk industry in UT, a said the Lieutenant Governor.
On the sidelines of the event, the Lieutenant Governor also highlighted the achievements recorded in various sectors in Anantnag, and said that all districts are also establishing new paradigms of development work.
In Anantnag district, a record 3000 projects were completed last year and in the current year Rs. he added.
Calling J&K an oasis of talent, the Lieutenant Governor urged young people to walk the path of peace and be part of the nation’s development journey.
Mohd. Yousuf Gorsi, Chairman of DDC Anantnag, commended the UT government for taking dedicated measures to promote arts and crafts to provide livelihoods for artisans and rural entrepreneurs.
Dr. Hina Shafi Bhat, Vice President of J&K KVIB, speaking on the occasion, said that the establishment of Martand Chainstitch and Crewel Embroidery is one of many measures taken by the Council for the Promotion of Arts and Crafts. traditional crafts.
The VC also shared the vision of establishing more traditional arts and crafts clusters in J&K to provide sustainable employment for traditional industry artisans and rural entrepreneurs.
Vivek Bhardwaj, Additional Chief Secretary, Department of Industries and Commerce, reiterated the UT administration’s commitment to improving the incomes of craftsmen and craftsmen, by providing the necessary handhold for young entrepreneurs, by in addition to providing support to artisans for the marketing of their products on national and international platforms.
On the occasion, the Lt Governor congratulated artisans and artisans for their contribution to the sector. Previously, the Lieutenant Governor inspected stalls set up by stakeholders and various government departments, and also interacted with artisans.
Vijay Kumar, ADGP Kashmir; Dr. Piyush Singla, Deputy Commissioner Anantnag; Sh Farukh Qazi, Secretary, J&K KVIB; Members of the PRI, heads of departments, senior civil servants, as well as craftsmen, craftsmen and entrepreneurs were present in large numbers for the occasion.