Palestinian fashion designer Khawla al-Tawil (R) helps a model put on one of her designs at her store in the West Bank town of Beit Sahour on Feb. 9, 2022. (Photo: Xinhua) 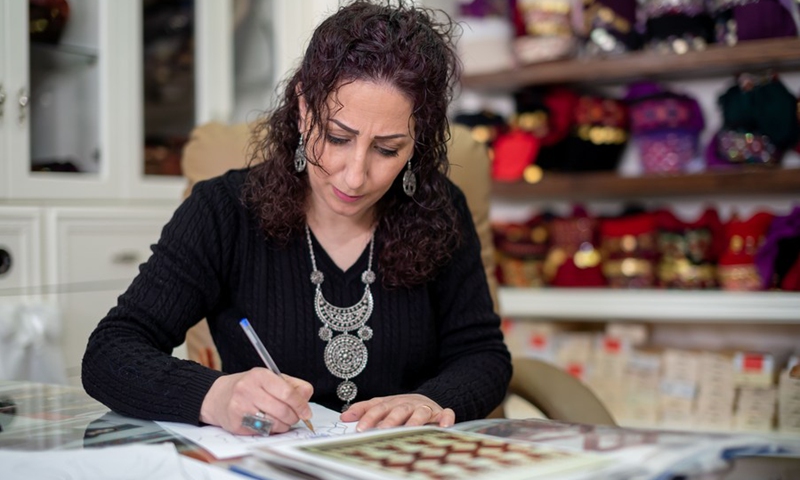 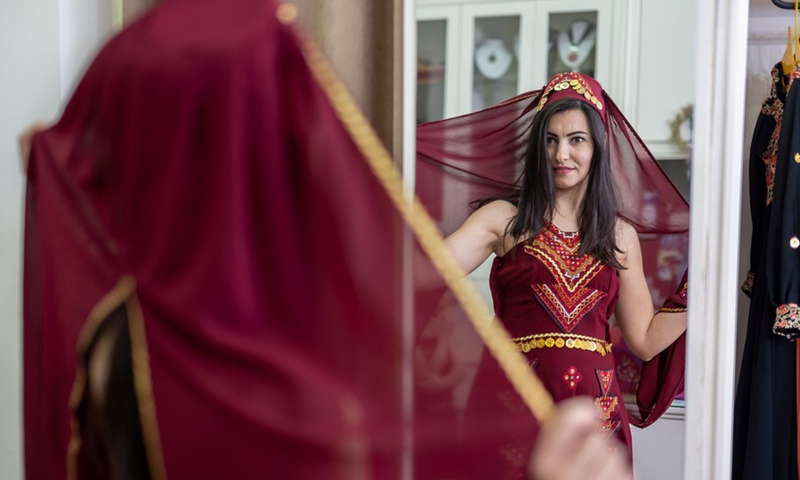 A model wears a dress designed by Palestinian designer Khawla al-Tawil in the West Bank town of Beit Sahour on Feb. 9, 2022. (Photo: Xinhua) Palestinian fashion designer Khawla al-Tawil (R) helps a model put on one of her designs at her store in the West Bank town of Beit Sahour on Feb. 9, 2022. (Photo: Xinhua)

Khawla al-Tawil, a Palestinian designer from the West Bank, has been busy serving those who come to her clothing boutique for the exquisite traditional embroidery.

After working for 20 years for mainstream brands in the West Bank, the 44-year-old mother of three has managed to make her own mark putting a modern fashion twist on Palestinian hand-embroidered suits.

More than a decade ago, “I was seriously considering opening my own business, but I didn’t know how to stand out from dozens of other highly skilled designers,” she told Xinhua.

Then an old Palestinian woman wearing a traditional dress embroidered with aesthetic patterns appeared in her view, a pivotal moment for her to truly embark on a more creative path.

“I wondered if I should start designing fashion using the art of embroidery…I didn’t give much thought and finally decided to design and produce my first (fashion) collection”, she added.

But this task was not easy for the Palestinian woman, because her new project required a lot of time and effort, especially since she had a job at the time and there was no help for his new career.

She decided to quit her job and focus on preparing her project, and she spent about a year designing her first collection.

“At the beginning, I was afraid of failure, I didn’t have specific clients at that time, and I didn’t know how to sell this collection,” she recalls. Nevertheless, she was determined to pursue the path she had chosen.

In 2009, al-Tawil made her designer debut at a fashion show in the city of Ramallah held as part of the activities for the Muslim holy month of Ramadan.

With many types of clothing, including dresses, pants and jackets, and an embroidered white wedding dress, her design collections were among the most acclaimed in the exhibition.

Attendees were amazed at her ability to adapt embroidery art to “beautiful and modern” fashion, the designer said.

“That moment assured me that I had taken my first steps towards success and glory, at least in the Palestinian territories,” she said. “It was an indescribable feeling.”

She was content with having confidence in her own talent to overcome the difficult beginnings, achieve initial success and later open a designer store Bint Al Balad.

“I wanted to be singled out. I also wanted to contribute even a little bit to preserving our Palestinian heritage and identity in a new way that would have its own resonance,” she said.

In 2021, the United Nations Educational, Scientific and Cultural Organization (UNESCO) inscribed “the art of embroidery in Palestine, practices, skills, knowledge and rituals” on the Representative List of Heritage intangible culture of humanity.

“Year after year, there is a greater demand for Palestinian dress on public and private occasions. Women are proud to wear them,” she said.

Al-Tawil embroiders local elements into its design, such as roses, leaves and grapes for which the Palestinian territories are famous.

“I have my own fingerprint for my designs, and I’m very happy that customers know that,” she said, adding that it encouraged her to attend more local fashion shows.

The designer said she looks forward to participating in fashion shows in Europe and honing her skills by training outside the Palestinian territories on the use of cutting-edge technologies in design.

“It’s our history and our heritage, and it’s important to be recognized on the world stage… We have our civilized history, which every Palestinian should be proud of,” al-Tawil said.

Soha al-Tawil from the West Bank city of Bethlehem is among hundreds of customers who come to buy traditional Palestinian clothing.

“It’s good that we preserve our heritage and are proud to recover our forgotten civilization,” she told Xinhua while wearing a recently purchased embroidered dress.