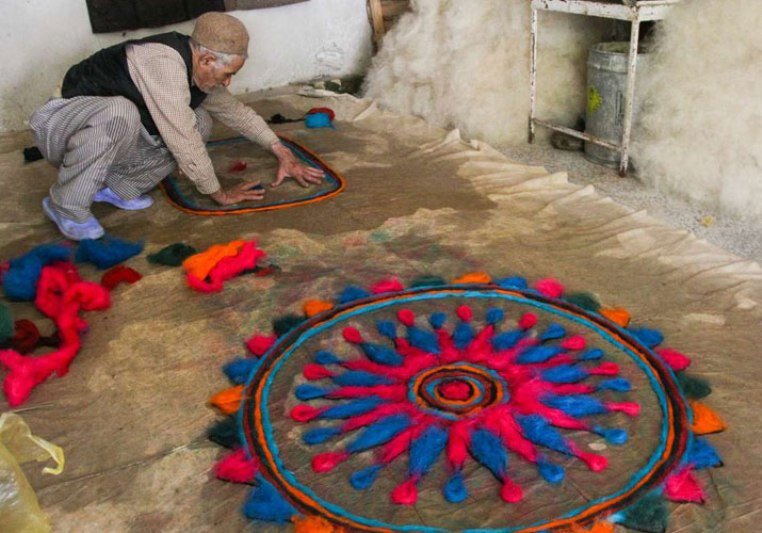 TEHRAN – The craft of Namad-mali (literally meaning beating felt) has long been practiced in villages in Semnan province to produce Namad (a traditional carpet) from woolen fabrics by rolling and pressing them .

The method of making felts is almost similar in different regions of Iran, but they sometimes vary in color, pattern and thickness.

Felts are known to be the oldest flooring made by mankind. There is a famous story told by the felt makers of Semnan, that Prophet Soleiman had a son who was a shepherd.

According to Visit Iran, he wanted to make a textile from the wool of his sheep. He tried so hard to fail. In desperation and anger, he beat the wool with his fists while crying over it. Her tears flowed on the wool and intertwined them. And that’s how the first felt was made.

Felt is a kind of textile that is made without the use of a loom. It is not knitted but is created from two basics. First, humidity and second application pressure. During the manufacturing process of the felts, water is poured over layers of materials used during their compression, which causes the fibers to cling together in a single piece of fabric.

The most commonly used felt material is sheep’s wool which is sheared in the spring. It has long fibers and comes in different colors. A piece of felt can be made in one working day, which is why this product is not very expensive.

However, it is a very exhausting process. To create a felt, the maker first lays pieces of colored wool on Karbas, a kind of fabric that is also used to paint canvases, depending on the final design. Then layers of worsted wool are laid on top. The Karbas are rolled together, holding layers of wool. The felt maker starts rubbing and squeezing the roller while applying hot water repeatedly and step by step.

Felts are primarily floor coverings. But they are also used to make other tools, such as Korsi (a low table with a heater underneath in Iran), a horse blanket, kitchen utensils, dolls, and clothes. Felt patterns and designs are usually created by abstract patterns inspired by nature. Some examples are Chahar Goosh-e Khorshidi, a symbol of the sun, cashmere or diamonds.

Semnan’s history dates back to ancient Iran when the city was part of the Median Empire. At the time of the Achaemenid Empire of Persia, Semnan was a magnificent city. After Alexander’s attack, Semnan became famous as Koomesh. The great era of prosperity of this city began after the advent of the Parthian Empire. Due to its location, which was at the center of traffic from the north, south, east and west, Semnan had always been subject to a power struggle during the Sasanian era. In the Sasanian and post-Islamic periods, the city was the base of the central governments of the region.