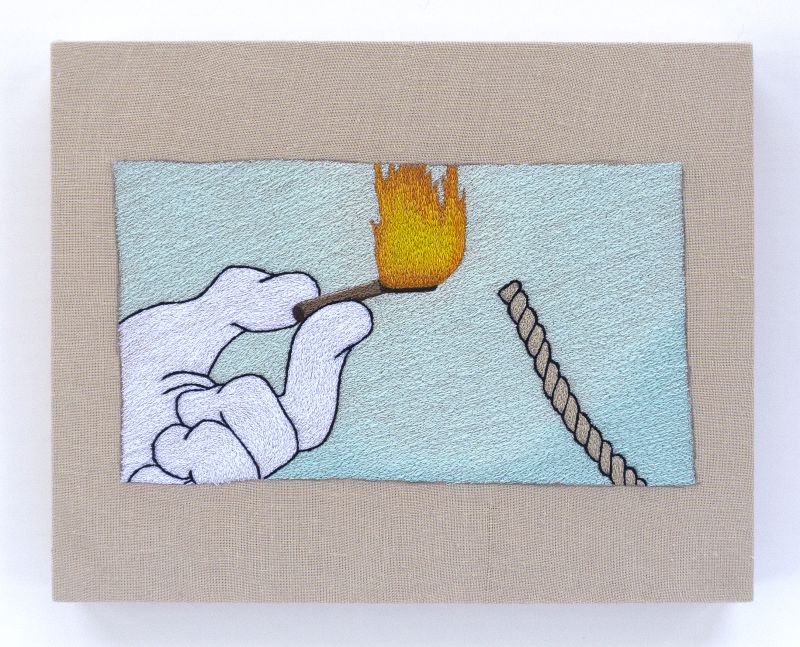 Working with a standard – albeit modified – sewing machine, Peter champions the art of embroidery to create fantastic stitch-by-stitch works of fabric art. In NO NO NO NO NO, his first solo exhibition at the Massey Klein Gallery, he draws on his love of post-war cartoons such as Warner Brothers and The Simpsons to create works of art that seem to rise up against the world in a state of defiant protest.

This theme manifests through frantically closed doors, wooden signs scattered throughout a forest, and even items such as handcuffs and a fuse about to be lit. Representing both denial and impending danger, NON NON NON NON captures the many meanings that can be summed up in that simple two-letter word, “no”.

It is not surprising that many works on display can be read with a negative connotation. In the play “Some Locks Don’t Hold”, we see a person left to fend for themselves against an oncoming horde as their barricade fails. In ‘Forced to perform’ the viewer sees the threat of an impossible task, complete with dizzying perspectives.

However, not all images are necessarily negative. Some are open enough for viewers to inject their own positive meaning. Grab the wooden signs scattered throughout the snowy woods. Does their simple declaration of “no” dissuade the viewer or does it rather warn them of the dangers that lie in wait? “No” can also be read as a statement of resistance, signaling strength and hope.

Meanwhile, in the meticulous title “Out from under rocks, clearing the crust from dismal eyes and see again friends”, we see two neighbors greet each other for the first time in, presumably, centuries as they wipe the distance of their windows. Could the “no” on this occasion be an exclamation of disbelief?

To help give us some insight, Peter adds, “In a twist on the optimism of this piece, the diptych ‘Stuck, Only Until It’s No Longer Practical.’ presents problem and solution in panels mirrored, albeit a little slyly.”

He adds: “Similarly, the pairing of a soft sculpture titled ‘Duds’ – in which twenty-two red, fibrous sticks of dynamite are rendered ineffective and decoratively stuck to the wall – and a ‘Teetering on indecision’ embroidery .” representing the moments of contemplation before lighting a fuse and embarking on the path of destruction, a choice not yet made but considered, delayed enough for the match to burn to the tips of your fingers.”

NO NO NO NO NO is a fun and thought-provoking look at what it means to refuse, made all the more entertaining and accessible thanks to the ACME-like characters who seem to inhabit this world of embroidery.

The result of a “fervent editing process”, these works begin with screenshots from old cartoons. Peter focuses on the smallest elements that contain the most action, cropping, retouching and adding extra detail before tracing, sketching and eventually sewing his designs onto linen.

And as for the titles of his pieces, which act as numbers and descriptors, or even just something that Peter finds funny, they all serve as a starting point for the viewer’s interpretation of the work.

“While trying to match the poetics of the image to the poetics of the words, the artist maintains that much is open to interpretation – he is as much interested in how others feel about the work as in what was planned”, adds the gallery.

Want to see Peter’s embroidery art for yourself? Don’t say no, go to the Massey Klein gallery instead before October 8th.