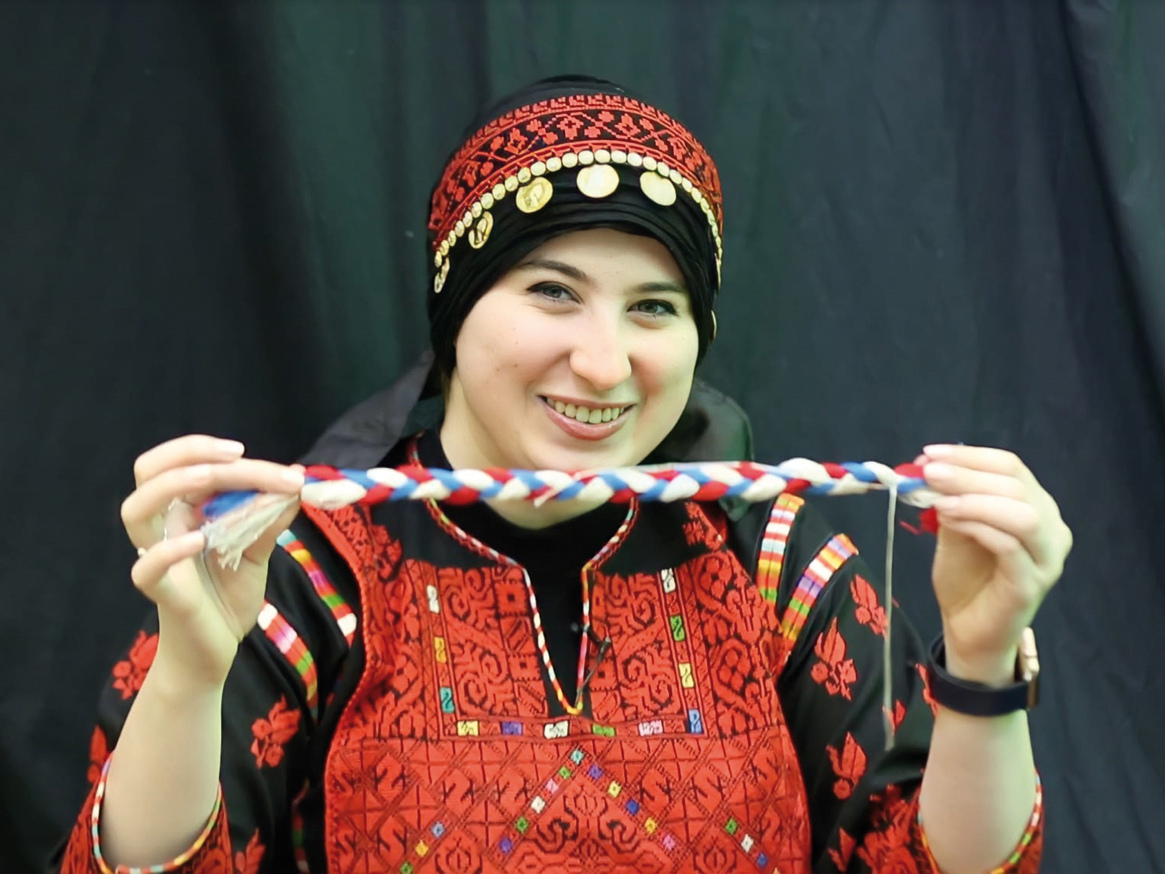 QF graduate turns embroidery into melodies about her homeland

Doha: Listening to stories since she was a child fueled her imagination, which helped to weave an image of Palestine in her mind. She fell in love with Palestinian embroidery through which she could read the history of her beloved country. So she wondered if stories could be written using yarn, so why not create something that can also be heard?

Still in search of her roots, Naima Al Majdobah, a graduate of the Virginia Commonwealth University School of the Arts in Qatar (VCUarts Qatar) – a partner university of the Qatar Foundation (QF) – embarked on an honors thesis project which allows people to hear the art of Palestinian embroidery as we see it. She used various embroidery designs from different regions of Palestine, each with its own history and meaning, to create unique musical notes.

“I wanted to use my passion for my country to create something special for my honors project. I wanted to tell the world about the beauty of Palestine, its rich history and its culture which is not emphasized enough before in the media.

“When people hear about Palestine, they immediately think of the Israeli-Palestinian conflict, and thoughts turn to reporting on war and struggle. What is often lost in this narrative is the unique craftsmanship, aesthetic beauty and deep traditions that create the culture of Palestine.

“When I joined a course called Sonic Explorations, to study sound composition and how to put it together, along with my passion for traditional Palestinian Thobes, I decided to delve into the history of Palestinian embroidery. And my father helped me connect with many women from Palestine and Jordan, and interview them about each model’s background and what they reflect culturally.

“Then I developed a design library, composed by redrawing the embroidery stitch by stitch in the Ableton Live app that I discovered during my course. The application transforms visual patterns into audio files that play repeatedly in a loop with slight changes in the combination of instruments using automated cycles. Due to their unique shapes, each pattern could be distinguished from the others by subtle differences, giving it its unique melody and feel,” Al Majdobah said.

Al Majdobah has also written a book under the same name of her project called “The Sound of Thread”, where she has collected all the information she has gathered from the books she has read and the interviews she has conducted with women who pass the art of embroidery down through the generations, and she linked each design to her hometown in Palestine and explained their historical and cultural background.

“With everything colonized and appropriated today, through my project, I aspire and seek to preserve Palestinian culture. For example, you can find these designs on Nike shoes, or people wear them as shirts or hang them on a frame on a wall, but no one knows that it is actually Palestinian art except a few -ones. And while it’s okay to be used here and there, I want to point out their origin.

“I also want to educate our generation. This craft was passed down from grandmother to mother to daughter, and because of technology and social media, people don’t like learning like they used to. So, I hope this project can help keep it alive”.

Al Majdobah expanded his project after his honors. She learned the trade herself and hopes to be able to pass it on to her children and grandchildren. She also led workshops on her project for her colleagues, seniors, graduate and postgraduate students in the Graphic Design stream. And she is currently translating the book which she hopes will become a reference on Palestinian embroidery.

“I wanted to create something tangible that people can keep and be able to relate to sound, because the pattern patches are very beautiful when you look at them, but there’s a sound behind them that no one knows about. And I believe the coming together of sound and sight creates an interesting experience that contains thousands of untold stories about the history of Palestine.

2022-05-19
Previous Post: Knitting for Warmth covers the community with care »Minden Times
Next Post: Crochet and knitting will be celebrated at the Fergus Fiber Festival later this month