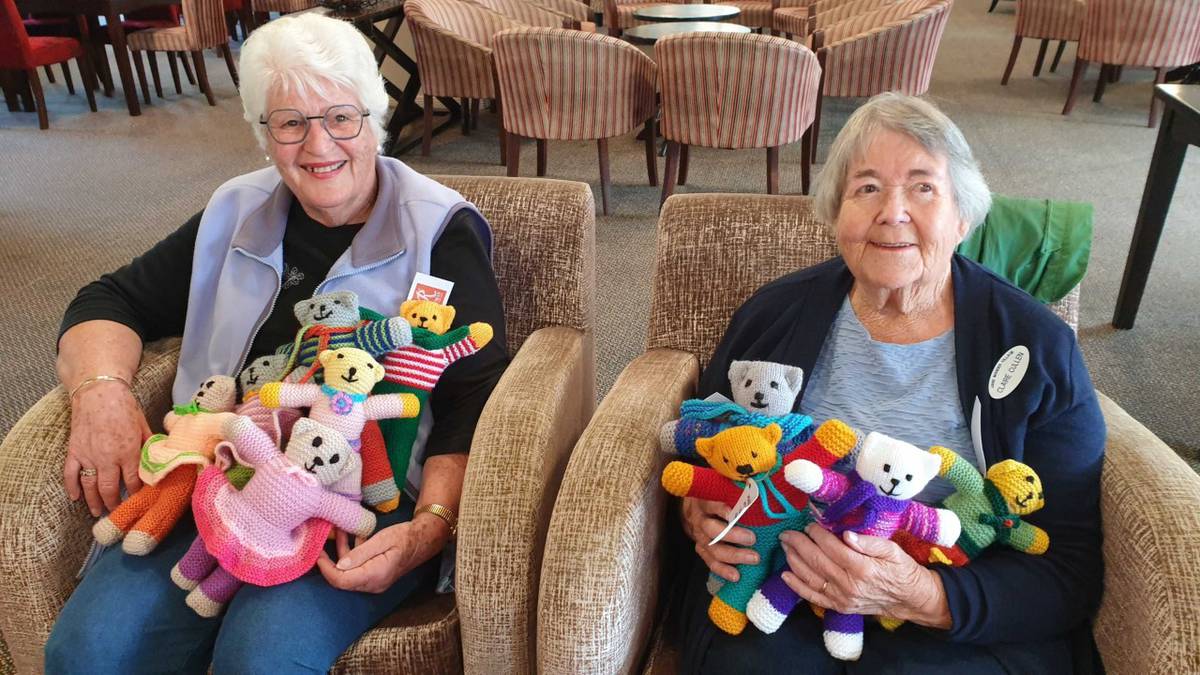 Jane Mander Retirement Village residents Michaela Codlin (left) and Clare Cullen with some of the Yuri bears they make to send to children in war-torn Ukraine. Photo /Supplied.

Residents of a retirement village in Whangārei staged a storm, making teddy bears to send to displaced children in war-torn Ukraine.

Residents of the Jane Mander Retirement Village have made dozens of handmade bears to send to displaced children in Ukraine, and they want the public to help them in their quest to make 20,000 hand-knitted Yuri bears.

They are among residents of 45 Ryman Healthcare villages taking part in a bear-making transtasman mission, joined by team members in villages and company offices in Christchurch, Auckland and Melbourne.

The idea originated with Ryman sales and community relations manager Debra Richardson, who in Melbourne took in a Ukrainian boy called Yuri after the Chernobyl nuclear disaster in the 1980s.

The project grew out of his discussions with Yuri (who is now based in Ukraine to fight off the invading Russian army) about how Australians and New Zealanders could provide support.

The Jane Mander Group has knitted 121 bears so far, with more on the way.

Richardson said the project is a tangible way for Ryman residents, team members and the wider community to make a small difference in the lives of the war-torn country’s youngest members.

“Being so far away, it can be hard to know how we can help,” she said.

“Thousands of Ryman Village residents are avid knitters, and this project lets them use a skill they’re expert at to send a token of love from afar.”

“[Yuri] made the decision to stay and fight for his country, and his family was evacuated to safety,” she said.

“The project grew out of my discussions with Yuri about how we could provide support from Australia and New Zealand. When I first shared the idea with Yuri, he said, ‘L Ukraine is stronger with your help, your empathy and your love. A million thanks to the millions of people who care.'”

People can show their support and get patterns to make a Yuri bear at www.rymanhealthcare.co.nz/yuri-bears-for-ukraine.

“Let Ukrainian children know that they are in our hearts and minds by devoting time and love to knitting a Yuri bear,” she said.

Following the devastating events in Ukraine, thousands of children were evacuated to other countries, or found themselves displaced or stranded at the Ukrainian-Polish border.

Many children had to evacuate without their parents, with little or no time to pack their belongings. From so far away, it’s hard to know how to help, but even the smallest gestures can make a huge difference.

”The Yuri bear initiative is our way of sending a symbol of love from afar to Ukrainian children – we would love your help in bringing this to life. We have set ourselves the goal of creating 20,000 Yuri bears. So even if you don’t knit, you probably know someone who does. So help us donate at least one bear from you, a family member or a friend. This way we can bring smiles to the faces of as many Ukrainian children as possible.”