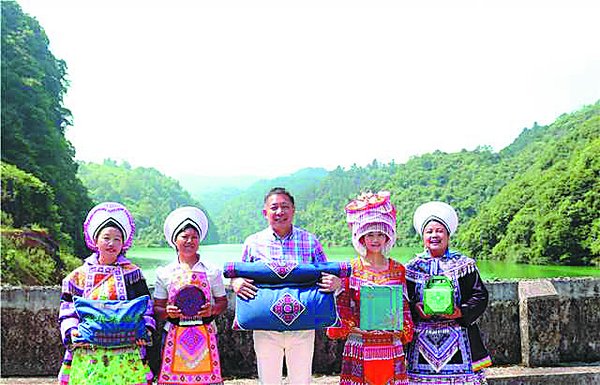 
A Spanish-Chinese businessman is promoting Miao embroidery abroad, increasing income for women in Guizhou province and promoting their traditional art internationally. Earlier this year, Zhao Naihua first saw Miao women working on embroidery in Houshan Township, Guizhou, and was moved by the beauty of the traditional art.

The 52-year-old then attempted to create a piece himself, to better understand the process.

While he enjoyed the experience, which allowed him to appreciate first-hand the depth of traditional culture, it also helped him understand the plight of women who depend on embroidery for a living.

“Miao embroidery represents the love of life and can last for many years,” Zhao said, adding that in the past, he knew the pieces were beautiful, but didn’t know much about the stories behind them.

The Miao woman who taught Zhao was diagnosed with breast cancer three years ago and doctors at the time told her she had less than a year to live. She told Zhao that at first she collapsed, but when she picked up her needles and threads, they helped her calm down. Gradually, she learned to make peace with her condition and continues to embroider while battling her illness, paying her medical bills with her embroidery.

Houshan Township, located in northern Guizhou, is home to around 10,000 people, 40% of whom are Miao. Girls from the ethnic group start learning embroidery at a young age, and most Miao women in the township know how to weave, dye and embroider.

“A machine-embroidered Miao outfit only costs about 200 yuan ($30), but a hand-embroidered one costs more than 6,000 yuan. Some even cost up to 8,000 yuan,” said Li Zhaofen, a Miao resident of Houshan who relies on her. embroidery for a living.

“Although promoted and stimulated by the local government, the embroidery market is not fully developed and the women barely earn a living. If we want to ensure the transmission of this intangible cultural heritage and improve sales, the market must be opened up more,” Li added.

Originally from Shaoxing in Zhejiang province, Zhao moved to Spain in 2005 and currently serves as vice president of the China Investment and Trade Association in Madrid. He plans to use his connections to introduce Miao embroidery to overseas markets and help women earn more money.

After returning to Spain, Zhao held an exhibition to showcase embroidery, including clothing and accessories. It was a huge success. “The Chinese embroidery work is amazing and so beautiful. I appreciate this art more by wearing it,” said Madrid resident Juan Manuel Ojeda, who visited the exhibition.

As Chinese textiles and fabrics are popular all over the world, and Miao embroidery is loved by many foreigners for its charm, Zhao saw potential in the market.

He returned to Houshan and set up a workshop in cooperation with the local government and embroiderers. He sells their works to foreign clients, boosting the local economy and helping people to live better.

To mix fashion and traditional art, Zhao has connected Mexican and Spanish designers with embroiderers from Guizhou, who collaborate on creations online. “We did pretty well. In less than seven months, the sales amounted to around 200,000 yuan, and it helped 30 women increase their income,” he said.

Li said, “My coins were sold overseas thanks to good policies and Mr. Zhao’s help. Now I have a stable monthly income and I’m very happy.”

Next, Zhao will work with related government departments to train more embroiderers to encourage more people to get involved in preserving the art.

“Traditional techniques have been passed down well, but innovation is needed,” Zhao said, adding that the workshop will continue to help women produce innovative pieces to promote their work overseas.

Zhao Yandi contributed to this story.