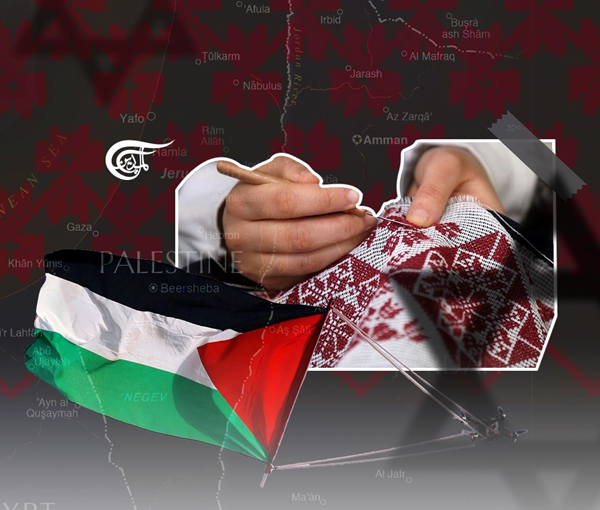 The art of Palestinian embroidery appropriated by the Israeli colonizer

Tatriz embodies the Palestinian identity and portrays a mysterious, bohemian and warm feeling of joy, splendor and elegance.

The most popular artistic expression in the culture of the Arab-Semitic Palestinian people is embroidery, known in Arabic as tatriz. The classic reddish color of the embroidery comes from the purple color of the Phoenician Canaan. Palestinian embroidery is also related to the ancient mosaics of Jericho.

If this traditional and cultural aspect persists, it is thanks to the Palestinian peasant woman who preserves and weaves this transmission to the rest of the nation.

The central garment of the tatriz is the long female dress, called tob. Each region of Palestine has its particularity, and everyone says: “The tob in my area is the most beautifulThere are contests and parades that are almost a procession, both in Palestine and in the Diaspora itself. It is a mind-blowing overflow of embroidery, which ignites the Palestinian identity. It is a visual poem which caresses us and which is also incendiary, a joy in the collective fire and in the intimate and the solitary. Yes, and from the solitary I was in my Venezuela under several weeks of rage, typical of all political activism, which is difficult and stubborn, when one night I walked through my own collection of Palestinian embroidery, amphorae of coffee, old keys from “Galilee” and “Jerusalem”, and other amulets. tobI placed a large tatriz on the floor, I tucked myself in with others tob, and I placed the other objects on me. I wanted to protect my difficult activism for Palestine. It was my intimate ceremony. Many Palestinian women have their solitary rituals. I met a young Palestinian in Jordan who showed me his collection; bags of embroidery, broken and dirty embroidery, among other things, he had very small, very old pieces. One senses the simplest mysticism between the young man and the tatriz.

My Palestinian peasant mother, a survivor of Al Nakba, was a weaver and sold her products in Ramallah. She once told me that “Going to Ramallah was like going to Paris…Ramallah was beautiful.” The tatriz embodies the Palestinian identity and portrays a mysterious, bohemian and warm feeling of joy, splendor and elegance.

There are old women who only wear tatriz; it is used at special events such as weddings, engagement ceremonies, graduations, political marches, dinner parties, special events and in daily life such as going olive picking.

In Ramallah, an old Palestinian woman said to me: “Embroidery is like writing“Maybe the tatriz is another code of manuscripts and parchments, a metaphor for another arabesque without ink, with thread and needle, spinning our Palestine. Another old woman from “Nazareth” said to me:The threads are the veins and the viscera of the Palestinians, and each time the needle plunges into the fabric, it is to hang on, to take root in our land that these Europeans want to steal from us.”

There are those who, on the occasion of calls for political unity, exclaim: “Let’s be like our tatriz, a plain fabric.” And it has become more recurrent within the diaspora and historic Palestine to feel in the same fabric… as a form of survival in the face of Palestinianicide suffered since 1948.

The tob is complemented by the classic hood lined with old coins and/or a shawl. There are also tapestries of crosses and embroideries that weave a picturesque story in which they capture the typical fiery Arabic dance, the Dabke. Also recreated are the harvesting of orange trees, the making of bread, the grinding of pepper and oregano, the fermentation of yoghurt and the olive tree, symbol of Palestine, among others.

Over time, he began to embroider the key, the symbol of the return of Palestinian refugees forcibly expelled from their homeland by Israeli colonialism. Subsequently, it obtains its handmade organic evolution by extending to cushions and tablecloths. It is even incorporated into the padding applied to the olive wood. It extends to various objects such as book holders, bookmarks, glasses holders, key rings, bags and a cumulus of other objects.

The value of tatriz for the Palestinian people can be measured, for example, in the context of divorce litigation. Still in the declaration of inheritance, the collection of tatriz is included in the will.

It was and is common to agree to go to someone’s house to weave in a group. The weaving is done between coffee, tea, sweets, chard cupcakes, stories and testimonies, songs, gossip, laughter and quarrels.

It is common to see a woman, especially an old woman, on a balcony, under a grape bush or olive grove, or in the living room of the house weaving.

For decades it has been popular tatriz cooperatives that generate a whole economic source. In the Palestinian refugee camps, this work operates and is an economic resource; however, in some cases they are exploited because they are very poorly paid.

There was a period, especially in Gaza, with the rise to power of the Palestinian religious party, Hamas, when the tatriz was cast aside as a garment and replaced with Islamic attire. The tatriz schools, in collaboration with historians and artists, have revived tatriz as a national banner.

Today the tatriz is omnipresent in Palestinian sentiment; it is a cultural and national flag; its importance lies in its symbolism and imagination. Embroidery is the conductor of a collective feeling. It is another bastion of resistance and survival. Palestine, after the imposition of the colonial regime of “Israel”, has become a forbidden people, and that is why its cultural identity in itself becomes subversive. In view of this situation, Palestine requested UNESCO to be declared Palestinian Intangible Cultural Heritage of Humanity.

The “Israel” that was imposed by Europe and the Europeans in 1948 in Palestine is classic colonialism; it is a colonial anachronism today in our 21st century. It is the worst form of colonialism in the history of mankind because it has the distinction of being a colonialism that does not come from a nation as in classic colonialism, but rather, it comes from a movement that seeks to colonize and disguises itself as a nation, and that is why it usurps not only the homeland of the native but also its history and its culinary and cultural expression.

In the past, faced with the barbarism and obscurantism of colonialism, the colonizer was presented as the symbol of greatness, honor and glory. Destroying the culture and history of the colonized was an act of purification by which the beast is destroyed. Today, colonialism is a disgrace, and that is why the colonialism of the Euro-Zionist movement appropriates indigenous history, cuisine and cultural expression to hide its colonial nature and its roots in Palestine.