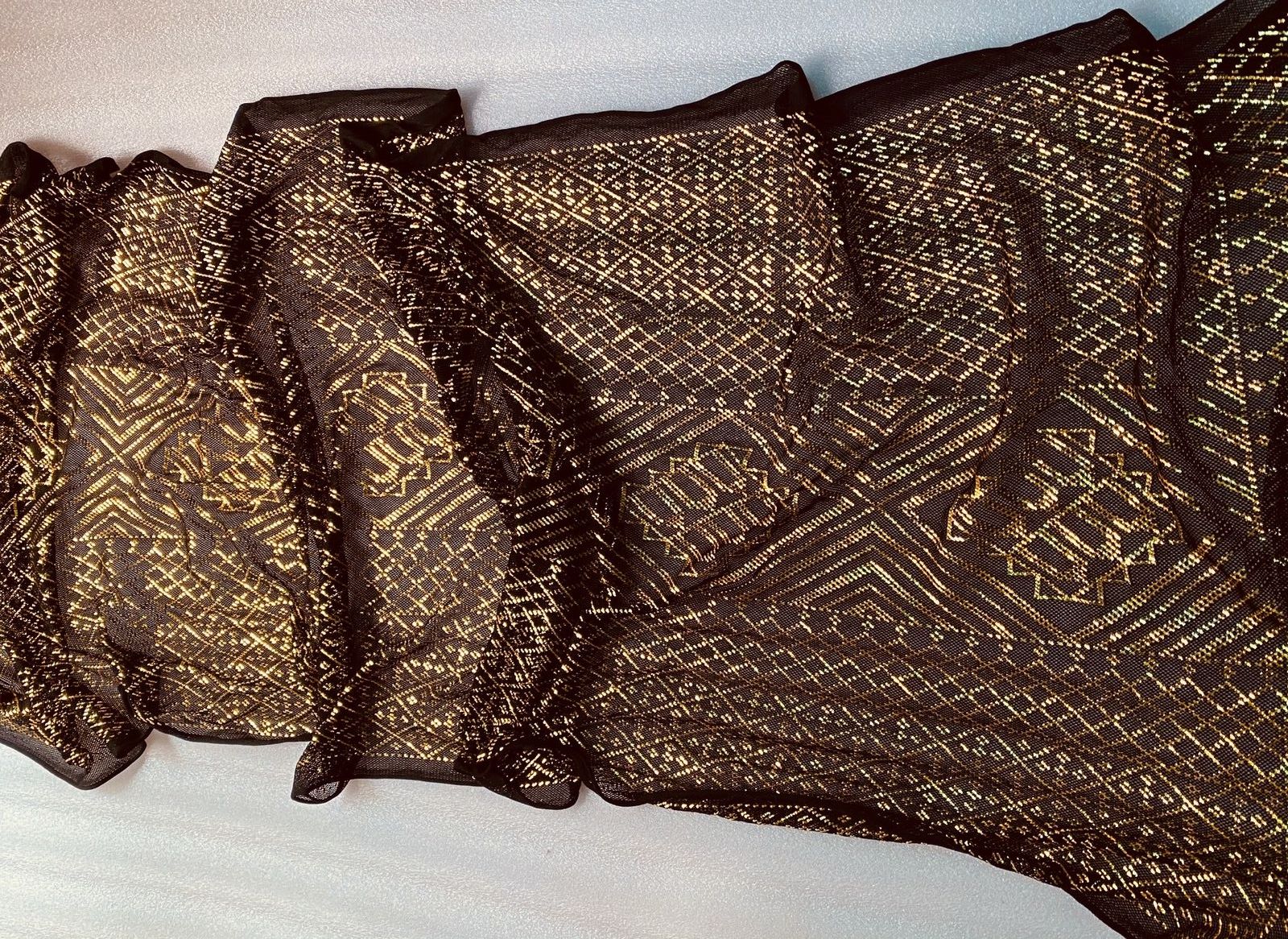 A canvas like no other, tulle-bi-telli is a traditional embroidery with metal thread that weaves grace and elegance. Born in the city of Assiout in Upper Egypt, the beautiful textile combines cotton or linen mesh with small strips of metal. The textile is rendered using a variety of stitches resulting in highly textured designs with beautiful patterns.

Egyptian netting is named after its 19th century city of origin, ‘Assuit’, and is often known as ‘tally’ or ‘tulle bi telli’ throughout Egypt. The concept of metallic embroidery dates back to ancient egyptwhere embroidered threads of hammered metal, especially strands of gold, have been found in the tombs of ancient rulers, especially in of King Tutankhamun tomb in the 14th century BCE.

The art of embroidery is known as a craft that historically spread in Egypt; it was made by artisans who embroidered linen, silk, and cashmere fabrics with gold and silver threads to give the final product extra luster. The art of embroidery has been linked to religious beliefs, as well as Egyptian customs and traditions. Religious Vestments Worn by Priests Churches as well as wall hangings often have embroidery elements in their designs. Embroidery long held a prominent place in Egyptian culture during the 1930s, when it was used to make belly dancer costumes as well as part of a bride’s trousseau.

He is still present in small villages in most rural areas with his distinctive style, tools and yarns.

Favored for its ability to drape, tulle-bi-telli was first produced in Assiut by hand-embroidering over leftover mosquito nets. As the fabric became more popular, it was replaced by a Victorian invention, the reel. Invented by JOhn Heatcoat in 1808, bobbinet was a machine-made fabric made from cotton or, in older pieces, linen.

The telli is woven using several lines of silk, cotton or nylon threads of different colors, combined with metallic gold or silver to create intricate and unique braids. Traditionally, the metal straw was silver or real gold, but synthetic materials have replaced the much more expensive alternative. The braiding process can take anywhere from a few hours to a few weeks depending on the pattern.

With a wide, flat needle, thin strips are threaded and crisscrossed through the holes in the net. The inevitable crisscrossing due to the holes in the netting almost always results in geometric patterns. The textile features images of floral motifs, trees, women with children and amuletic motifs. At the end of the 20th century, the designs featured lighter geometric shapes, the sun and stars and animals.

The Glitz and the Glamor

Tulle-bi-telli is often found in the form of a shawl, but it can also be seen in large and small pieces. Large pieces are often used as canopies and traditional Egyptian robes.

Shawls are available in different sizes, most being long and narrow, and prominent with different patterns. He believed that designs were passed down through families, such as weaving and embroidery work. coptic christian designs often have animal and human figures, while Muslim the shawls are based on geometric patterns. Geometric designs were popular with the Art Deco movement, beginning around 1925.

In Upper Egypt, it was customary for each bride to receive a shawl before her wedding. Brides would often receive a shawl as a gift from her family or the groom’s family to be fashioned into a traditional veil or dress known as a Galabeya.

popular in egyptian culture, tulle-bi-telli was commonly found in the wardrobes of singers, musicians and the Egyptian elite. It was then transported to the western side of the world, where Hollywood met the fabric of Egypt.

Iconic Egyptian belly dancers Samia Gamal and Tahiya Karioka flaunted tulle-bi-telli in their performances. The always beautiful Egyptian Miss Universe, Charlotte Wassefwore tulle-bi-tellu in the 1934 world pageant. It was also discovered to be worn by the ancient Egyptian queen Nazli.

Tulle-bi-telli can be seen in Cecil B. Demille’s Hollywood production of Cleopatra, on Hedy Lamar in Samson and Delilah, and in creations by Rudolf Valentino. The fabric has been found in the wardrobes of international artists, including Cuban music star Rita Montaner, as well as fashion houses like Dior, Jean-Paul Gaultier, as well as Mariano Fortuny’s famous Delphos dress.

The cloth is still made in Egypt today, but is more common in Sohag Governorate than Assuit. The women around Upper Egypt, especially in the village of Shandawil Islandrely on making tulle-bi-telli as a source of income to help raise their children.

The story behind the Coptic cross tattoo