Over 8,000 Tewkesbury residents were involved in creating the six-metre-long embroidery, which weaves the rich fabric of Tewkesbury’s social history with events from the town’s colorful past.

The imposing embroidery, a municipal equivalent of the famous Bayeux Tapestry, will be unveiled in full for the first time this weekend, the culmination of a five-month community project called Stitchstory.

Measuring six meters in length, the intricately detailed embroidery is lined with more than 120 individual pieces of stitching, created by locals who wanted to add their own memories or connections to the city.

One of the details shows Tewkesbury London and Rio Paralympian Mel Nicholls crossing the city’s Myth Bridge on a handcycle. Fittingly, Mel was the last person to add a stitch, joining a team of volunteers helping to stitch the 10 embroidery panels together ahead of the public unveiling at Watson Hall.

Chatting while stitching, Mel said: “I love the color and character of the embroidery, it’s so bold and bright and I love its individuality…it’s Tewkesbury. I love Tewkesbury, I loves the people and the scenery. It shows that people care and have cared about our city. It’s a really special place. 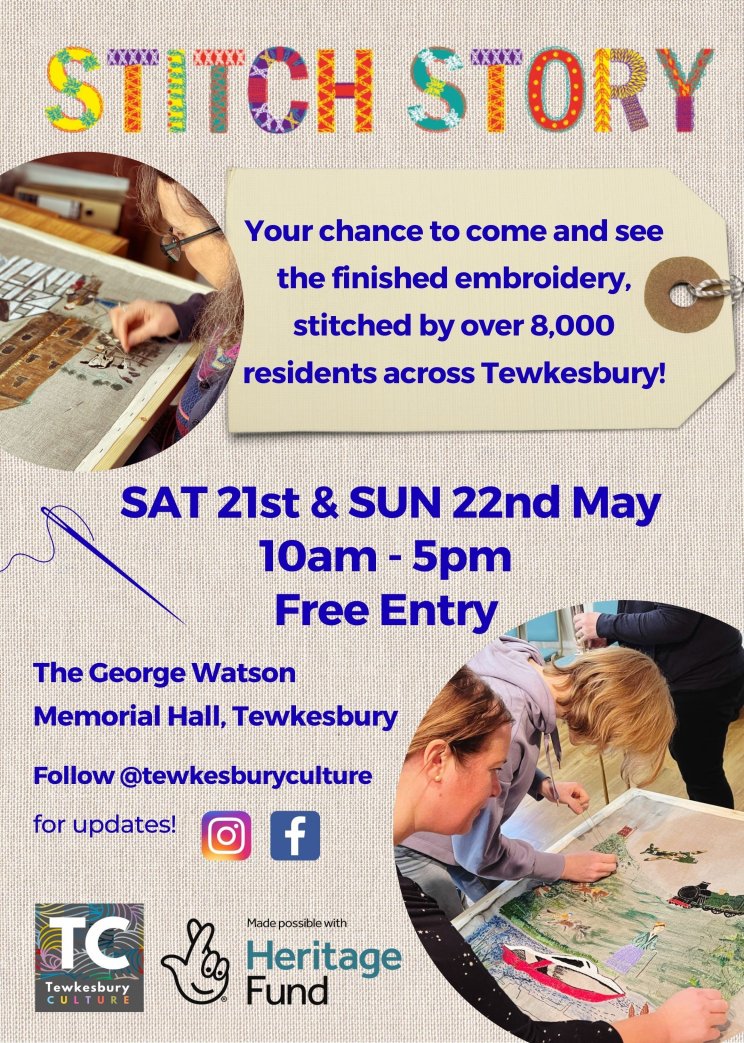 Jack, 100, and his wife Ena, 98, from Ashchurch Care Home, are the most experienced seamstresses to have scored on the project, with the youngest being just six weeks old.

Well-known people to add their stitches have included the Mayor of Tewkesbury, Cllr Joanne Raywood, Gloucestershire Lord Lieutenant Edward Gillespie and actor Kerry Katona, during a visit to The Roses Theater in a touring production.

Over 100 workshops were held across the town and local villages, as well as visits to local businesses including MOOG and Cotteswold Dairy, the town’s primary and secondary schools, and the registration of embroiderers at events such as as the Tewkesbury Park Run, the Tewkesbury Pudding Club and regular rehearsals by the Tewkesbury Pub Singers.

On a Saturday in March, a High Street sewing marathon saw 850 people add their stitches in a single day. The team has also run a special walk-in session at the Tewkesbury Heritage and Visitor Center and weekly sessions since December at the Tewkesbury Library.

At the heart of the project is the artist and embroiderer from the Tewkesbury community Joe Teague who conceived the initial idea and led sessions and helped residents with their sewing.

Jo said: “It’s been a lot of fun doing the workshops. I’m telling stories that a lot of people already knew about our city, trying to remind people of everyone who’s lived here before us and the impact they’ve had. had and continue to have on the city and our lives.

“From five-year-olds playing the Battle of Tewkesbury to sitting down with older generations being told their stories of characters such as John Moore, it’s been a great privilege to be part of those conversations.

Tewkesbury Artist Sam Morris created the embroidery artwork and documented the project with photos and video vlogs. Sam believes the timing of the project, after two years of living within the confines imposed by Covid-19, contributed to its success.

Sam said: “At a time when isolation had robbed us all of social trust, I have personally witnessed the community spirit of Tewkesbury creating a perspective of hope through art and storytelling. Tewkesbury is a city of creative people and places that I’m so proud to be a part of.”

Community Involvement Producer Megan Dunford added: “The Stitchstory Project has become something I could never have dreamed of when I started this during a dark, dark December last year.

“Five months later and we had, literally, over 8,000 people, who came to us, reached out, took a needle and stuck it in the fabric, found it, pulled through and brought her back again, and many of those 8,000 did it again and again, adding many stitches.

“Such a simple act, but something bigger than that – they gave us their time, shared their memories and in doing so showed an act of solidarity and support. We were warmly welcomed at all schools, in stores, in churches, in community halls, in close-knit groups, in people’s businesses and homes.”

You can see Stitchstory at George Watson Memorial Hall on Saturday, May 21 and Sunday, May 22, from 10 a.m. to 5 p.m. FREE ENTRANCE

Stitchstory is funded by the Heritage Lottery Fund and supported by Tewkesbury Culture, a creative network and resource to promote collaboration, support and access to culture for the people of Tewkesbury.