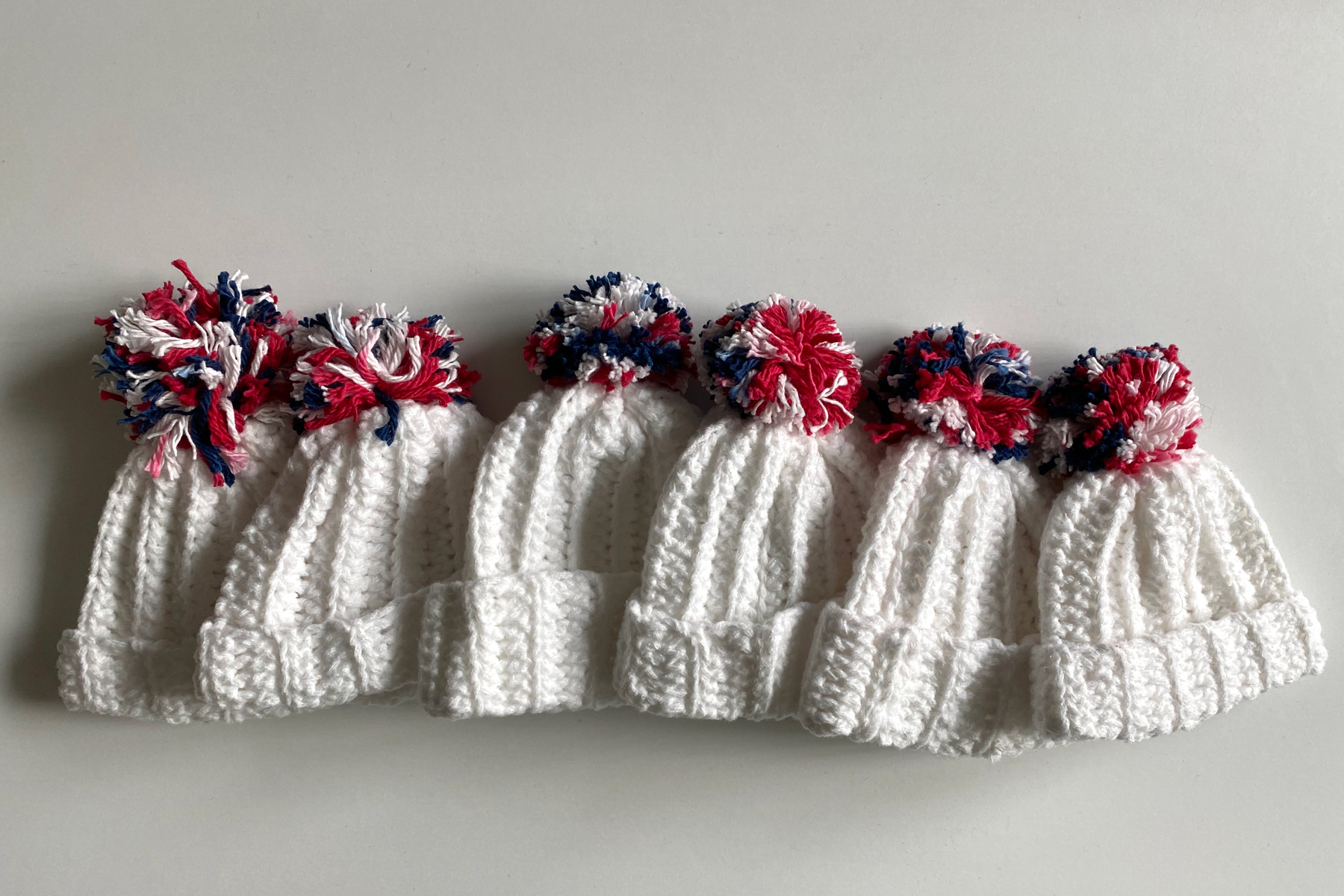 When Kathryn Huang first tried her hand at knitting, she admits it didn’t quite go to plan. But it would also be difficult to call this a “mistake”.

What started as a few hats too small for an average child’s head led to the creation of Mad Hatter Knitweara non-profit organization operating in several states and several other countries whose mission is to knit and crochet caps for premature babies in the neonatal ICU.

“It’s a bit overwhelming how many hats we have now,” Huang said. “But just knowing that someone is grateful for what we do makes us happy.”

Huang first learned to knit from his cousin, Tiffany Chang, after Chang started teaching family members how to make hats that Huang said fit “perfectly on the dolls.” Huang’s sister, Christie, was volunteering at San Gabriel Medical Center at the time. After visiting the NICU, Christie noted that they could use “premature” hats. The sisters challenged themselves to see how much they could earn before the end of the year. For Christmas 2014, they brought 160 hats to the NICU at Children’s Hospital Los Angeles. From there, Madhatter Knits was born.

When Huang, a civil engineering student, started attending USC in 2018, she brought Madhatter Knits with her.

“Although there were knitting clubs at USC, they weren’t meant to help preemies, in particular,” Huang said. “I thought I would continue the influence of Madhatter Knits here.”

Whether you’re a fan of knitting or just love to give back, the USC Student Club welcomes you

The organization started with just a handful of people knitting what they could, but grew to about 20 members. Although Huang said some students join because they are interested in knitting or crocheting, others simply join the philanthropic element, such as current vice president Veronika Zilajeva.

“I didn’t really like knitting or anything like that, so I didn’t really pay attention to the club at first,” Zilajeva said with a laugh. “But then as [Huang] was talking about the impact it has in hospitals, I said I was going to try it and I really enjoyed it.

The new senior has worked with Madhatter Knits since joining USC in 2018 and has helped the club become an officially recognized organization on campus. Although Zilajeva joined and stayed without ever really getting into knitting, quarantine has changed her attitude.

I’ve always considered knitted and crocheted items to be one of the ultimate tokens of “thank you” or appreciation.

“It was definitely not a very calm and peaceful time,” Zilajeva said. “Having a hobby that impacts not just other people but you, I think has helped me get through those semesters in part.”

For other members like Divya Jeyasingh, crocheting has been a hobby most of her life, which she admits is probably not typical.

“All my classmates called me ‘grandma’,” she laughed. “I was laughing at myself so much and I didn’t care.”

Jeyasingh was already working on full coverage in her spare time when she heard about Madhatter Knits. The fourth-year student joined earlier this year in her mid-40s after deciding to channel her crochet skills and enthusiasm into a good cause.

“I’ve always considered knitted and crocheted items as one of the best thanks or appreciation because you know someone has made something by hand,” Jeyasingh said. “It’s just a really nice way to show someone you care.”

Huang said that although the number of hats varies each season, they try to send them out four times a year, usually with some type of seasonal or holiday theme. Surprisingly, Huang said the pandemic hasn’t really slowed down production, but has actually created more of an incentive to provide hats to a neglected and vulnerable population. It was during the pandemic that the group saw another need it could fill for its target demographic.

They have started making “maternal protective care kits” complete with masks, sanitizer and gloves. But then Huang decided to use this engineering knowledge to build handmade face shields for premature babies.

Huang admits the project was short-lived as the CDC adjusted its guidance on COVID precautions. She said they would still provide face shields to mothers who specifically requested them, but the group itself went back to its roots with knitting and crocheting hats.

Madhatter Knits has since partnered with an organization called Compassionate Colorado to donate hats to children in the Navajo Nation.

“They really need more materials and more resources, and we are happy to provide them,” Huang said.

The nonprofit knitting team looks forward to meeting in person

With social distancing and precautions, the group was unable to interact with the mothers they serve or even each other. The one constant throughout the pandemic has been work itself. Starting this semester, it can be done in person again, which Huang, Zilajeva and Jeyasingh are all grateful for.

“Let’s do the knitting parties; let’s have the crochet parties,” joked Jeyasingh. “I’m just thrilled to finally be in person and to meet a lot of faces that have been virtual.”

For some members, work has been an outlet. Others learned a new skill and a new hobby. Besides what this means for the members, it has been a real difference maker for the mothers and children of the NICU.

“Honestly, I don’t think I need to see people’s faces; I know they appreciate it and that’s enough,” Zilajeva said. “They don’t need to thank me or anything because I don’t do it for that. It’s just a good thing to do.