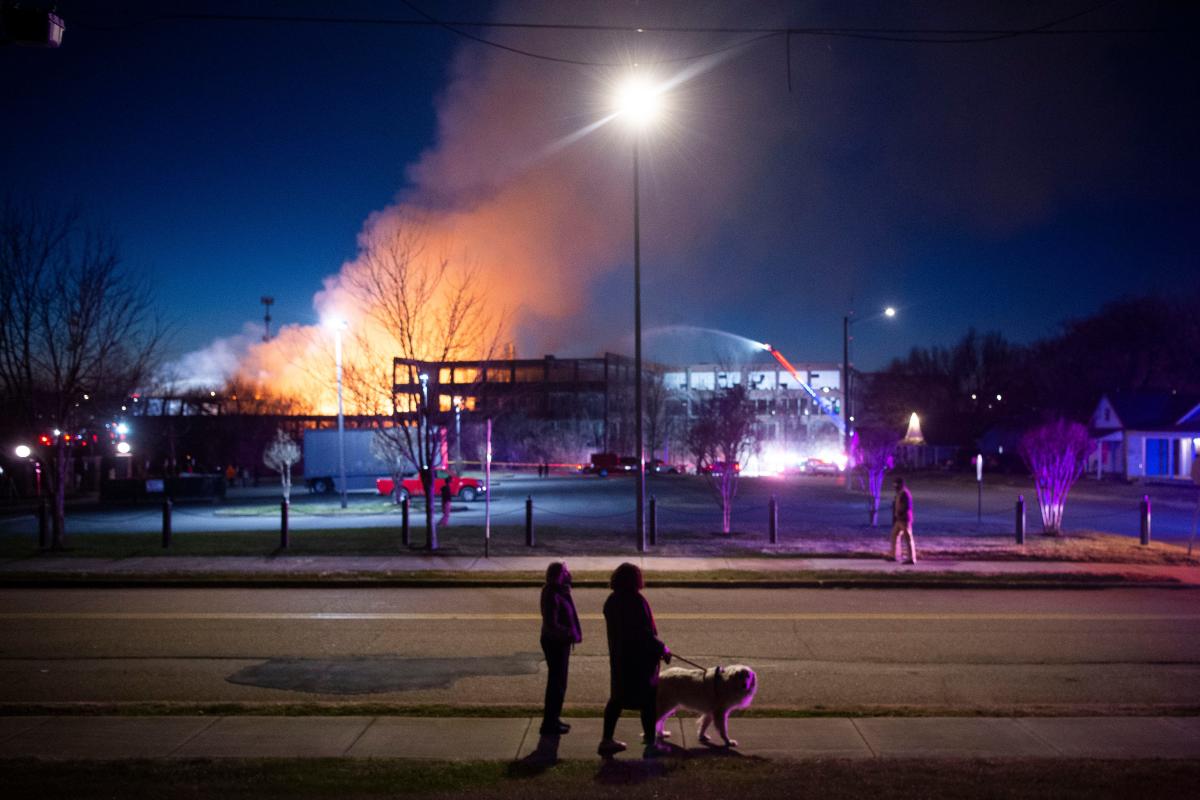 Flames and smoke have cleared the downtown skyline, but it’s unclear what’s next for a vital piece of Knoxville’s history.

The Standard Knitting Mill complex, which sits just northeast of the Old Town, caught fire twice in eight hours. Officials do not believe the two fires are related, but they may never know what started the second fire. By Monday morning, the structure was “heavily, heavily damaged”.

Despite the fire, plans to redevelop the property will continue, but plans could change once the damage is significant is evaluated. Ryan Wilusz spoke to the property’s developers about what this means for the project and what it could eventually become (spoiler: groceries not on the table).

If you are unfamiliar with the site, its 120 years of history extends deep into Knoxville and includes a surprising nickname which predates Marble City and Scruffy City. Operations began in 1900, and at one point the mass production factory was producing about one item of clothing for every four people in the country, according to Knox News records.

The facilities closed in 1989.

What is the best use of the property? My vote goes to affordable housing and a Publix.

Oh, and one more thing: This is your one week warning to make your Valentine’s Day reservations…unless you want to be single on February 15th. “The Scruffy Stuff” Brenna McDermott and I are helping Ryan plan a night out on the town.

We’ll talk about more downtown tips for celebrating the Hallmark holiday in next week’s newsletter. But if you need to drop your loved one a hint in the meantime, make sure they’re a subscriber to Urban Knoxville.

Sip local: Bring your friends to Old Town to try one of Public House’s Bang Up craft cocktail pitchers that serve about three. Try the Tropicali, a mix of pineapple-infused tequila, Ancho Reyes Chile liqueur, lemon, lime, and simple syrup.

Eat locally: Wednesday is National Pizza Day, so be sure to get a slice of downtown. Choose from Dazzo’s on Gay Street, South Coast on Sevier Avenue, or Da Vinci’s, Barley’s and A Dopo in Old Town.

Local listening: Sunset on Central, the free music festival based in Happy Holler, has been teasing a comeback all week. It reminds me of the 2019 festival and some of its acts, like The Lonely Biscuits. Listen to “Afterglow” from the latest festival headliner and hope they make a comeback.

It’s all for this week. Be sure to tip your bartenders, get your shots, and drink more water.

In the meantime, try our new feature: weekly news quiz. Test how much attention you paid to the news in Knoxville this week. Can you score 100%? Write to me!

2022-02-04
Previous Post: Milwaukee man spends 16 years knitting for those in need
Next Post: Discover the special king of Iranian embroidery